The weak GOP presidential candidates just got a gift...

If there ever was a moment of Republican honesty, this was it. They are now admitting how they've been politicizing the judicial branch with partisan activist conservative justices for years, and intend to make it even worse by delaying Senate approval.

They never intended to defend the Constitution, but transform what it means by the conservative activist court.

The flurry of right wing tweets pictured here says it all, and shouldn't be forgotten during the campaign. In fact, a number of surreal pointblank promises to nominate the most extreme conservative candidates were made in tonight's GOP debate, but that's perfectly acceptable. Can't make that promise about nominating a "liberal" justice.

The absolute balls to think we should wait till we have a new president. Anybody falling this stuff: 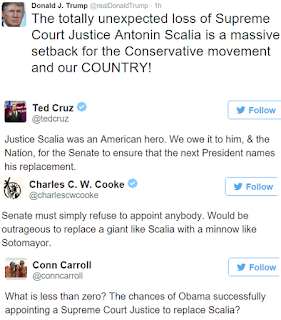 It took only a few minutes after news broke of Supreme Court Justice Antonin Scalia's death on Saturday for conservatives to demand that Senate Republicans block any replacement nominated by President Barack Obama. The most prominent reaction came from Conn Carroll, a spokesman for Sen. Mike Lee (R-Utah), who sits on the Judiciary Committee -- through which any Supreme Court nominee must go.

The haste with which Scalia's death was reduced to a political battle was a bit alarming. What is perhaps more telling is the immense political importance that one man's death could have on our system of governance. Beyond the president, the death of a sitting justice on the U.S. Supreme Court has possibly the greatest ripple effects.

With a possible tie on the court, I wonder how many challenges we'll see from the lawsuit crazy GOP now that they don't have their sure thing anymore?

Hillary Clinton's strongest suit is her ability to take the fight the Republicans. Clinton's statement on Scalia frames the argument perfectly, using the Constitution against the conservatives.

This absolute nonsense was a crowd pleaser during the GOP presidential debate:


"It’s been standard practice over the last 80 years to not confirm Supreme Court nominees during a presidential election year,"said Sen. Chuck Grassley (R-IA) on Saturday.

Not quite, according to Voxdotcom:

Igor Volsky, a staffer at the liberal Center for American Progress, responded with a tweet listing justices who have been confirmed in election years: 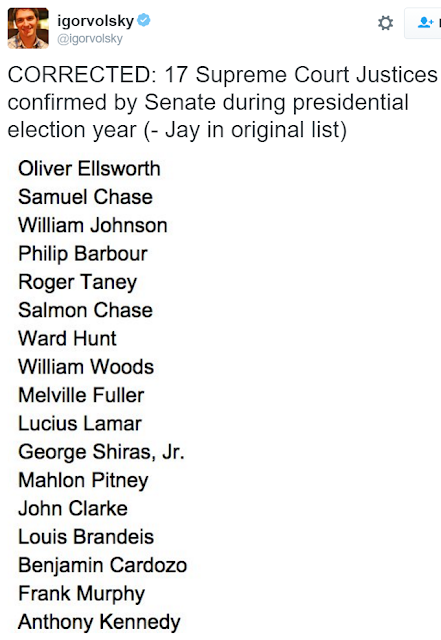