The Republican push to punish the poor has degenerated to simple humiliation via the food stamp drug testing program.

While tightwad conservative voters want to keep more of their hard earned money, they’re perfectly fine wasting cash on humiliating the needy with drug tests for the innocent.

Public policy through intimidation, a roaring success? Nope, the proof is in again; out of 7,600 recipients, 21 tested positive, 12 of which had their food stamps reduced because they had kids. 9 lost their food stamps. Success? 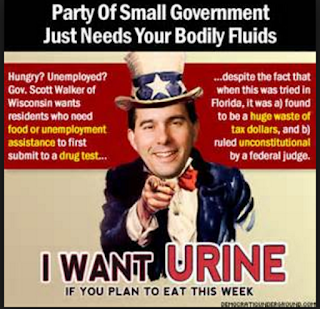 North Carolina revealed early results on Tuesday from a round of drug tests given to those applying for or living with the help of welfare.

From the 7,600 recipients and applicants given an initial screening, social workers referred only 2% for drug testing. That amounted to 89 people. Of those 89, 21 people tested positive for drugs, representing less than 0.3% of the total number of those screened. Of the 21 people who tested positive for drugs, 12 of them will receive reduced benefits because they take care of children in need of support.

Here are a few other "success" stories: 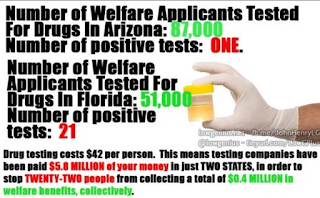