Walker clings to myth of the "Wisconsin Comeback," still blames eviscerated enemies for "vengeance (that) knows no depths."

Scott Walker has made "vengeance" against his enemies a sick passion that "knows no depths."

Promising to "wreak havoc" was a real confidence builder for voters too.

Political "vengeance," redefined by Walker, resulted in the creation of a blacklist using the names on his recall petitions; union busting Act 10 "bomb" wasn't just a gift to his special interest corporate donors but a once and for all way to defund the Democratic Party; obliterating local control in Democratic state strongholds; and those liberal eggheads at the University of Wisconsin...well lets see what they'll do with massive cuts in funding.

Scott Walker projection just took another surreal comic turn, with the following fund raising letter. He's going back to the "I'm a victim" well again. If you're not enlightened by what Walker calls the true "progressive" movement of supply side, top down, one party rule, then you're an enemy of the state, who's "vengeance...knows no depths."

Walker's arrogance is on full display, believing angry donors will write out checks because his opponents "are gleeful about our 'Scott Walker for America' campaign debt?" That's a bragging point? What are we, five year old's? Maybe donors will wonder why Walker recklessly spent money he didn't have.

By the way, we're not exactly feeling the "comeback" (a term he plagiarized from someone else's campaign)? I think someone has a problem taking criticism. 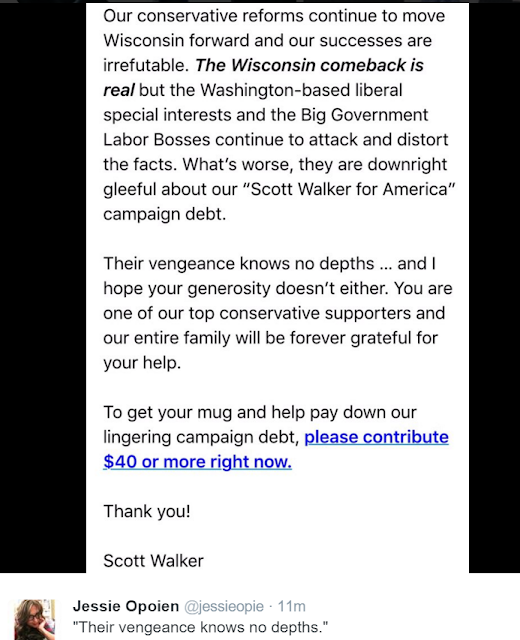 As reported by Paul Fanlund in the Cap Times:

Dane County Executive Joe Parisi (said), "I think (Wisconsin Republicans) made a deliberate decision that their main goal, despite the stated goal of creating jobs, was to destroy their enemies." Ah, but Republicans hate Dane County for the way we vote. And for them, politics, not the good of Wisconsin constituents, always comes first.