Does a Republican S**t in the Woods...and so much more Part 2!!! The DNR Blacklist!

DNR Collapsing under Walker Deregulation, Anti-Science Politics, and Stepp Appointment as Secretary: After dramatic cuts to the DNR's science staff and employees, along with “a major reorganization that could send duties to other agencies and streamline regulatory work including an experimental plan to allow some businesses to draft their own environmental permits,” we’re now finding out the DNR started a blacklist against those effected by DNR environmental incompetence and non-responses. JS-Stein/Marley:

The state Department of Natural Resources blacklisted a group of 16 citizens and activists with complaints about how the agency managed wildlife and administered clean water and other rules. Being put on the "do not respond" list was supposed to mean that going forward agency staff would not respond to the complainants except for those responses required by the state's open records law.

While Scott Walker talks about saving Wisconsin taxpayers money, he really isn't, since the cost is shifting to individual taxpayers who don't get any media coverage at all...until now:


One of the people on that list was Owen Buske, a 78-year-old Franklin man who said that he had ended up paying more than $16,000 to install a new well on his property after problems with contamination of another well that he shared with two other parties.

Buske said he called about 20 different DNR employees for a total of 40 times in an unsuccessful attempt to improve the well and his drinking water.

The presence of a DNR enemies blacklist (that will only grow over time) is just part of Republican efforts to privatize or exploit state and national park land, exemplified by the militant takeover of federal property in rural Oregon. Remember, they wanted the government to give back "their" land. Of course the DNR blacklist didn't come from any of the administrators, just some "unnamed" rogue assistant...oh, that's not true either:


The do-not-respond list, which is marked "confidential" at the top of it, was released to the newspaper under the open records law. DNR spokesman George Althoff said in an email that the list was created in around 2013 by an unnamed administrative assistant to help track contacts from people who were deemed either very repetitive or abusive.Names were referred to the list by a variety of DNR officials, including Mike Bruhn, then the No. 3 official at the agency, and by the office of Secretary Cathy Stepp. The last name was added to the list in early 2015, Althoff said. Stepp was appointed by Walker and she in turn appointed Bruhn.

The DNR has found itself under criticism … Environmentalists have sued the DNR twice since December over the length of time they must wait for records they have requested. The Milwaukee Journal Sentinel reported Feb. 5 that the DNR screens and shepherds records requests deemed politically sensitive by running them past political appointees before the records were released.

In the comments section, resident right wing scattershot media pundit David Blaska (MrBluster) gave us an insightful glimpse into party thinking; citizen dissatisfaction is a nuisance and should be ignored if it doesn't advance the party goal. We saw that when hundreds of thousands protested Act 10, resulting in no give-and-take, no compromises. Pedro the Good's response nails it: 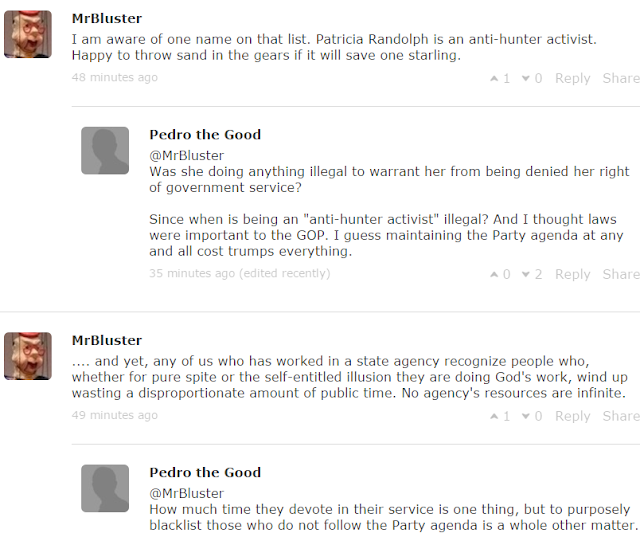