It's becoming increasingly clear Scott Walker's lack of response and disregard for youth safety at the Lincoln Hills School for Boys has exposed the ugly underbelly of our "small government" do nothing governor: 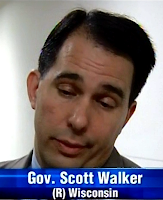 State Corrections Secretary Ed Wall has resigned from his post amid a growing scandal over conditions at a troubled Northwoods prison for youth and a ramping up of the FBI's involvement in a massive probe into alleged abuses there. Wall notified Gov. Scott Walker of his resignation on Feb. 5, with his last day being Feb. 27.

Wall and Walker have faced repeated revelations that their aides knew for years about troubling incidents at Lincoln Hills School for Boys...

Here's what I blogged a few days ago that involve another big correctional breakdown:

The Failure of Act 10 - The Problems at the Columbia Correctional Institution: Public safety fell apart after Act 10, since corrections staff no longer had input, and many up and quit. Because of losing 541 employees, Walker's DOC Sec. Ed Wall thought it was important to increase oversight. Yet Wall projected a different managerial stance:

Following the passage of Act 10, 541 employees retired from the DOC. In 2012 resignations went up 40 percent. At CCI, staff report seeing more people leaving, some recent recruits deciding not to stay along with the exit of veteran employees.

CCI staff have often said that when concerns about safety and security are brought up to management, the response from Warden Mike Dittman and DOC Secretary Edward Wall is “there are 1,000 people in line to take your job.” In one meeting with legislators in October, Wall reportedly responded to a comment that more staff would be leaving in the next year by saying, “I don’t care. Let them go.”

Walker's response was classic BS, since he would demand Wall's resignation the day after he found out about his comments on February 4th:

“I would love to see the documentation. I’ve never heard him say that. I would be interested in hearing where that is documented, rather than rumors from staff out there. I’ve yet to hear that. If that’s something you can document for us or show, that would be concerning to us, but I’ve never heard that from the Secretary or anyone else in the administration.”

For a party that complains often about not being able to fire public employees, going as far as doing away with 100 years of civil service regulations, Walker is just moving Wall into his old taxpayer supported job as the head of the Department of Criminal Investigation. It gets better: He'll be placed on paid leave, $108,000, until the criminal investigations are over. You can't make this stuff up folks.

The media still held Walker accountable for the corrections debacle. That may change...JS:

Unsatisfied with the explanations so far, Racine County officials moved their youth out of the state facility 30 miles north of Wausau in 2012. Milwaukee County officials are seeking to do the same, which would withdraw the majority of inmates from the prison and leave it with a gaping hole in its present operations. The joint federal and state probe of the juvenile prison near Irma in Lincoln County is investigating allegations of prisoner abuse, excessive use of force, child neglect and sexual assault, as well as retaliation against accusers.

The Journal Sentinel reported Thursday on a botched state response to the beating and sexual assault of a youth at Lincoln Hills that led Racine County officials to pull all juvenile offenders from the facility and sharply criticize the incident to Gov. Scott Walker and to top state corrections officials.

Records ... show clearly that despite Walker's repeated statements that he was surprised by more recent allegations of abuse, his office and his administration were told of troubling conduct at the prison in February 2012.

Then-Racine County Circuit Judge Richard Kreul sent a memo directly to Walker on Feb. 10, 2012, detailing the sexual assault from the month before and the failure of Lincoln Hills staff to notify law enforcement, child protective services and county officials about it. "Almost 50 years in the legal system and I've seen and heard a lot, so (I'm) not naive as to what 'prison' is about. But the indifference in this sordid tale is absolutely inexcusable," Kreul wrote to the governor.

Judge Kreul summed it up with this:

Twenty Lincoln Hills employees have been put on paid leave as part of the investigation, Staab said. Of those, 11 remain on leave, six have resigned or retired, two have been fired and one has returned to work.