Who wants Panicky Guy, Dumb Ron Johnson in Charge of anything...?

I've been saying this about our breathless, sky is falling dumb ass for years.... 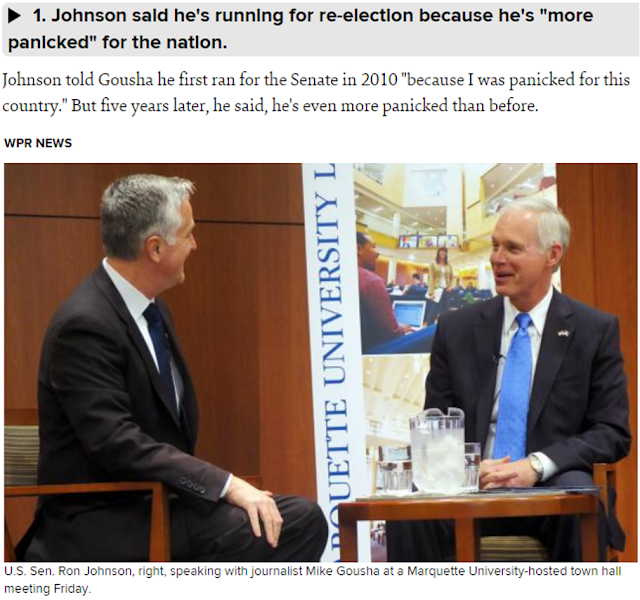 Senator Worries Too Many Ineligible People Getting Obamacare Subsidies

Yet is another fantasized panic attack:


(Johnson is) worried the Obama administration's system for denying Obamacare tax credits to ineligible applicants is so lax that it could lead to many undocumented immigrants getting coverage.

But the facts run counter to Johnson’s paranoid fantasies:

Johnson cited previously released statistics showing almost 500,000 applicants had to have their tax credits revoked after they didn't provide sufficient documentation, which he said his staff estimates to work out to about $750 million in taxpayer funds in the form of tax credits.
According to  Centers for Medicare and Medicaid Services spokesman Benjamin Wakana, "We have a robust verification process to make sure that those who are eligible for financial assistance can receive it, while also protecting taxpayer dollars."

But 500,000 denials isn't enough to make the ACA look like a failure. Of course more needs to be done to deny people coverage…because ObamaCare sucks, right?

Still, Johnson said in his report that more needs to be done to make sure people who are ineligible for health care tax subsidies never get them, even for a short time.