Walker's arrogant "I don't Care" Department of Corrections now in shambles after Act 10.

In 2012, Scott Walker appointed Dept. of Corrections Secretary Ed Wall, who's one major responsibility was public safety. We're now finding out that he's been an incredible failure.

But we also need to hold Walker responsible. I know Republicans don't like it, but the same "buck stops here" rule applies to Scott Walker. Where has Walker been during the breakdown of corrections staffing and documented abuse? Oh that's right, Act 10 solved all our problems, not made them worse.

Walker's “Working for Wisconsin” tour dubbed the “2020 Vision Project,” where he is supposedly seeking local advice, is a sham. According to one attendee:

The format didn’t allow for more dialogue about problems facing the state. “The governor didn’t address what was being shared. He recorded it. He listened. But I can’t say he gave us a response to any of the issues that were raised.”

Walker never mentioned the Failure of Act 10 - The Problems at the Columbia Correctional Institution: Public safety fell apart after Act 10, since corrections staff no longer had input, and many up and quit. Despite losing 541 employees, Walker's DOC Sec. Ed Wall didn't think it was important to increase oversight?

Following the passage of Act 10, 541 employees retired from the DOC. In 2012 resignations went up 40 percent. At CCI, staff report seeing more people leaving, some recent recruits deciding not to stay along with the exit of veteran employees.

CCI staff have often said that when concerns about safety and security are brought up to management, the response from Warden Mike Dittman and DOC Secretary Edward Wall is “there are 1,000 people in line to take your job.” In one meeting with legislators in October, Wall reportedly responded to a comment that more staff would be leaving in the next year by saying, “I don’t care. Let them go.”

Buck stops where? Walker sees the dangerous conditions at CCI and the dramatic staff reductions as another problem to run from. Contract it out. Walker isn't kidding either when he blamed previous administrations. He really thinks that gets him off the hook:


When asked after his speech about the state of the Department of Corrections and Columbia Correctional Institution in particular, which runs (by some estimates) a 20 percent staff deficit, Walker said that it was to be expected.


“This is an issue that predates me and predates Act 10. Back when I was in the Legislature, in the early 1990s, Tommy Thompson had a similar problem. It’s part of the reason why for a while he looked at out-of-state contracts for holding inmates.”

Anecdotal Walker flip flops on Anecdotes: After countless Walker policy changing anecdotes were found to be unprovable or flat out fabrications, Walker won't allow other peoples anecdotes about Warden Dittman and Wall's comments make him look like a complete incompetent, even when they're true: 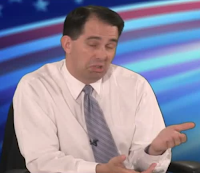 “I would love to see the documentation. I’ve never heard him say that. I would be interested in hearing where that is documented, rather than rumors from staff out there. I’ve yet to hear that. If that’s something you can document for us or show, that would be concerning to us, but I’ve never heard that from the Secretary or anyone else in the administration.”

Democratic offers to help partisan attempts to Embarrass Walker? Instead of being suspicious of the Democrats, he should have listened:


In September, Sen. Jon Erpenbach, sent a letter to the co-chairs of the State Legislature’s Joint-Audit Committee, requesting a vote on an audit of the DOC. In January, Erpenbach, with a group of representatives including Rep. Dave Considine and Sen. Jennifer Shilling offered a nine-part proposal for addressing the problems in the DOC, separately proposed for a more convenient a la carte consideration.