GOP Budgets - "just as rough as the last time" - the result of badly written budgets, not spending.

Republicans have always had a foolproof budgeting plan that can't fail in the eyes of their low information voters: Got a budget shortfall again? It's not bad budgeting, they just have to cut spending again.

It's never due to bad decisions and supply side nonsense. Sen. Alberta Darling said exactly that when a reporter asked her what happens if revenues don't increase due to tax and spending cuts:


Darling: "...you have to further reduce the size and scope of government..."

They actually believe it's never their fault. After another bad budget with the usual predicted revenue shortfalls, clueless Republicans face another "rough" spot of their own making:


(Republican Sen. Scott) Fitzgerald told county officials he expects the next budget will be "just as rough as this past one."

Fitzgerald of course blamed the state's shortfall on a lagging national economy...Obama basically. Oddly, Minnesota has a $2 billion surplus, and no shortfall. We could blame Obama for that, right?

Also, if this were a real problem, then why aren't Republicans writing responsible budgets that account for that "lag" (because they can't budget). WPR audio:

While blaming Obama, Walker showed off his bad judgement by foolishly holding onto our fading manufacturing base. Two decades later, he's apparently still not heard that sucking sound...:

In response, as covered by Jakes TA Economic Funhouse, one of my favorite fighting Democratic legislators Gordon Hintze put out the following to the point press release. I hope we see more of this: 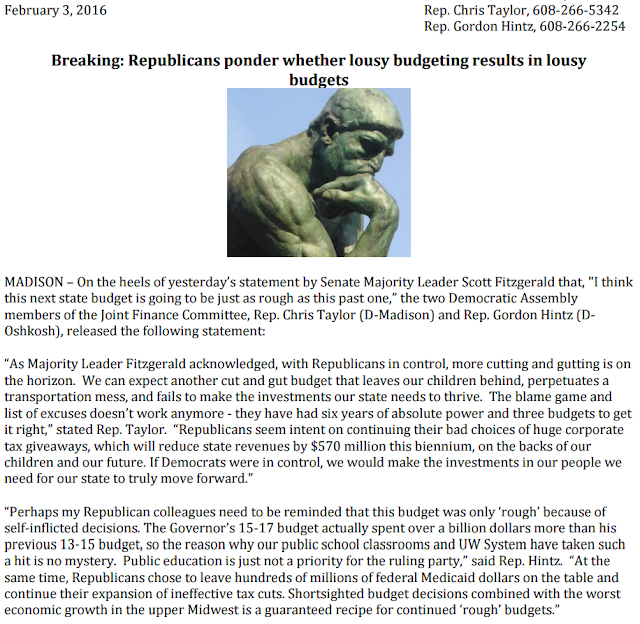 One final SUPPLY SIDE note: Below, I've collected a few other Republican supply side budgetary problems ignored by the press who are preoccupied with the GOP primary circus. Long story short, Republicans can't run a functioning government. It's a supply side death spiral nationwide, starting with Kansas Gov. Sam Brownback:


AP: Kansas collected $7 million less in taxes than expected in January, and a top aide to Republican Gov. Sam Brownback said that ongoing problems in key parts of the state's economy are to blame. Kansas tax collections have fallen short of expectations in 6 of the 7 months of this fiscal year … disappointing corporate income tax collections and lower-than-anticipated sales tax collections. Since the current fiscal year began in July, the state has collected$26 million less than anticipated, a shortfall of 0.8 percent … Kansas has struggled to balance its budget since the Republican-dominated Legislature slashed personal income taxes in 2012 and 2013 at Brownback's urging in an effort to stimulate the economy. GOP legislators last year increased sales and cigarette taxes to head off a deficit in the current budget.

And in Oklahoma, where they sadly reelected another bad Republican supply side governor....

Oklahoma Gov. Mary Fallin addressed the people of in her annual State of the State address saying her first priority is the state's estimated $1 billion budget shortfall … Governor Mary Fallin and Republican legislative leaders have said they intend to target "off-the-top" funding streams earmarked for things like transportation and public schools as part of an attempt to fill the roughly $1 billion budget hole.