Dumb Ron Johnson Says Fire him if you don't like him Blocking Justice Nomination.

Republicans are pushing a strict ideological agenda, which has nothing to do with you and me, the hapless voter. For instance:

Paul Ryan once said he'd be okay losing an election if he could pass something he knew was best for America, even if no one liked it.  Or the recent opens records request that found Republicans ignored overwhelming negative constituent feedback on very divisive bills, and passed them anyway.

And so it is with Dumb Ron Johnson, who'll block any supreme court justice nominee even if it cost him the race for his senate seat in November. So it doesn't matter if 62 percent of Wisconsin voters want the vacant U.S. Supreme Court seat filled this year? Who are these guys serving? WKOW:

Admitting to everyone again, Republicans want to fill the courts with conservative activist justices who legislate from the bench, a point the media doesn't want to focus on:


Johnson: "He’s got a track record. We know the type of justice he would appoint. We wouldn’t confirm that individual,” Johnson said. “Not acting is also withholding our consent, and that’s within our right.”

“America needs Supreme Court justices who share Justice Scalia’s commitment to applying the Constitution as written and to the freedom it secures.”

Oh, and I just ran across Sen. Mitch McConnell ripping into their now treasured Thurmond Rule, that states,  "judicial nominees should not be confirmed in the months leading up to presidential election." They do know this stuff is being recorded, right?

(Hat tip to Mal Contends): The Republican eye roll response to the simple mention of the Koch brothers name doesn’t change reality and their roll in all of this. That slick insulting ad is part of the Koch's special interest campaign. Politicus USA: 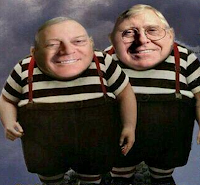 “your voice in November is the only voice to express an opinion on the vacancy on the court left by the death of Justice Antonin Scalia. And Senator Kelly Ayotte agrees; the American people should decide. This isn’t about Republicans or Democrats it’s about your voice. You choose the next president. Call Senator Kelly Ayotte. Thank her for letting the people decide.”

Similar ads were tailored for other Republican senators and their respective states such as Charles Grassley in Iowa, Ron Johnson in Wisconsin, John McCain in Arizona, Mitch McConnell in Kentucky and Pat Toomey in Pennsylvania.

To answer the question why Republicans would ignore polls supporting Obama’s nomination to the court:

The Judicial Crisis Network was joined by another Koch-affiliated conservative group, FreedomWorks, that issued warnings to Republican senators to block any hearing on an Obama Supreme Court nominee or face the significant wrath of the Koch brothers for disobedience.

As many pundits and politicians have noted already, the people voiced their opinion three years ago on who gets to nominate the next Supreme Court Justice and they elected Barack Obama whom they knew would be President until January 20, 2017.