Walker out to prove rising health care Obama's fault, not the insurers jacked up prices.

Scott Walker’s plan to raise health care insurance prices in Wisconsin is working. Why would he do that? To pour more money into for profit insurers pockets, and to make “ObamaCare” look like a failure.

The fact is, the outrageous cost for medical services by three of the biggest insurers in the state raised everyone's premium.

And don't forget about the state insurance commissions hands off approach to premium increases on the exchange. Walker voters, I'm guessing, don't mind handing their property tax savings over to the insurance industry, as long as it supports a very costly "free market" system. JS-Guy Boulton:

Claims data for three of the country's largest health insurers, (UnitedHealthcare, Humana and Aetna) including two of the largest in southeastern Wisconsin, rank the state as having the second-highest medical prices in the country, behind only Alaska.

A study by the Health Care Cost Institute, a nonprofit organization created to make claims data from health insurers available to researchers, found that prices for 235 common medical services grouped as "care bundles," ranging from basic tests to back surgery, were on average 81% higher in Wisconsin than the national average.

The supposed "best health care system in the world," still inaccessible to millions of Americans, continues to pick our pockets...because they can in the private sector. After checking out the stat below, you have to wonder why every Republican continues to make the false claim that moving to a single payer system won't save money:


The United States spends 50% more on health care than any other developed country — an average of $9,523 a person, or $38,092 for a family of four in 2014. And health insurance is expensive because health care is expensive.

The corporate response from the health care lobbyists in the state was laughable, if not a tad bit insulting. They claimed the report wasn't fair because the 3 biggest insurers weren't major players in other parts of the state, so...?

"The fact that the three insurers that provided data to the HCCI are not major players in most markets around the state makes this study misleading to readers, and largely irrelevant in Wisconsin," Brian Potter, senior vice president of the Wisconsin Hospital Association, said in a statement.

But UnitedHealthcare had 54% of the Milwaukee market, 49% of the Green Bay market and 37% of the Appleton market in 2013, according to a study by the American Medical Association.

The states industry lobbyist are telling us the same thing they said after the GAO released their study last year. Will we ever really know if we're paying too much in Wisconsin? No. Are we really that happy about cost of health care costs? We must be:


The same contention — that the claims database is not representative of the state — also was raised about a study by the Government Accountability Office released last year that found that Milwaukee and Madison were among the seven most expensive metropolitan areas in the country for three common procedures.

Further, even if the claims data used in the recent study by the Health Care Cost Institute is not representative of prices in some markets, UnitedHealthcare, Humana and Aetna still are paying the prices — and those prices are much higher than the national average.


If nothing else, the wide variation in prices strongly suggests a market that isn't working like other markets.

Government health programs, such as Medicare and Medicaid, set the prices they will pay.

The Republican argument against the Affordable Care Act has been successful because most people know little about it, and because they get coverage through their employer, which shields them from the actual cost:


But the U.S. health care system relies on the market to set prices paid by commercial health plans. It is a market in which the cost is largely hidden from the consumer — the patient — because medical bills are paid by health insurers and employers once someone hits his or her deductible and maximum out-of-pocket expenses. The result is that most patients are indifferent to the cost.

And having gone through a futile attempt myself to get a hospital to tell me the actual price of their treatment, because prices vary depending on what insurer their working with (add to that a different price for cash), this might be the best argument against a market based system:


Getting information on prices also can be difficult. Even when insurers make prices available to the people in their health plans, few make use of the information.

When you're sick, injured or unconscious, how can anyone make the kind of choices necessary for the healthiest outcome? Who wants to burden relatives, even if you're lucky enough to have a few? The article wrapped up with this:


Employers have been reluctant to embrace health plans designed to encourage people to get care from doctors and hospitals that provide quality care at a lower cost.

For instance, few employers have moved to health plans based on so-called reference pricing or on tiers. A health plan based on reference pricing pays a set amount for certain medical services, ranging from MRIs to colonoscopies to back surgeries. People still are free to get care from anyone in a network. But they must pay the cost above the reference price.

Health plans tied to tiered networks give people an incentive, such as waiving the deductible, when they get care from hospitals and doctors that provide quality care at a lower cost. "Now the question is how do we fix health care. We know it is too expensive."

Having had cataract removal, the chart below is even more interesting to me. The U.S. average represents what I paid directly to the doctor and surgery center, bypassing my insurer and the $7,000 deductible. Yes, it was cheaper to pay directly than use the deductible and insurer. So is the the free market insurance model bad. Yes, and that's where Republicans want to take us: 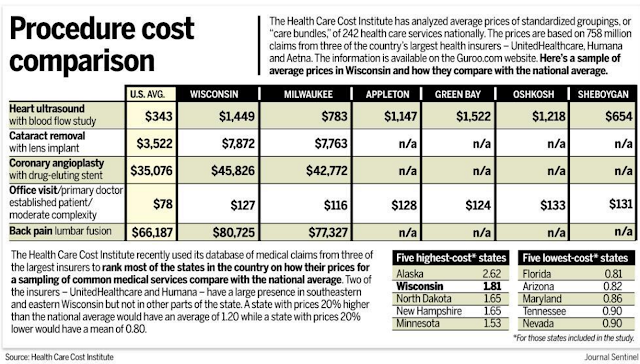