AG Schimel says no one, not even the DNR, can stop the devastating overall effects of high capacity wells on public waters!

When Brad Schimel ran for the AG position, he pointblank promised to fight for the administration’s policies, no questions. I thought voters would be appalled by Schimel's lack of legal expertise and Walker ass kissing. I was horribly wrong. Seriously, just the headline alone is enough to make you wonder, “what the hell?” 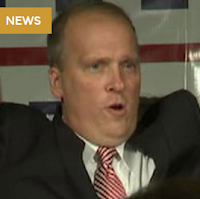 AG Brad Schimel issued a formal opinion stating that the state Constitution's provision on public waters didn't give the Department of Natural Resources authority to regulate construction of high-capacity wells beyond what was in state statutes … cites a 2011 law -- Act 21 -- that restricts the authority of state agencies to powers that are explicitly included in statutes or rules. Republican state lawmakers requested the opinion in February.

All it took was a strong signal by the Republican legislature. Done.

Lawmakers who asked Schimel weigh in said the backlog was created by a 2011 state Supreme Court decision that didn't take Act 21 into account. The Supreme Court ruling was resulting in the DNR having too much power …

The court said it was aware of Act 21 but the law didn't affect its analysis … The court ruled unanimously that the state constitution gives the DNR "the authority and a general duty ... to consider the impact of a proposed high-capacity well on waters of the state."

Schimel highlighted a passage from the opinion: "I have determined that the Supreme Court did not address the newly passed Act 21 … A formal opinion of the attorney general does not create a binding legal precedent, but it can be persuasive to courts and is presumed to be correct as long as the Legislature doesn't pass a law contradicting it.