Scott Walker is out for revenge.

Scott Walker’s world is an odd fantasy land of manufactured talking points that have sound ridiculous in reality, but are sure to piss off anyone with a sense of responsibility and business.

Walker’s massive cuts to the UW were so drastic that even his lapdog legislature trimmed them back. And as you might remember, those cuts were met with protests that filled the streets and newspapers for months. But guess who didn’t notice? Presidential nominee Walker. Come on media, the reveal is right there in his tweets. WSJ: 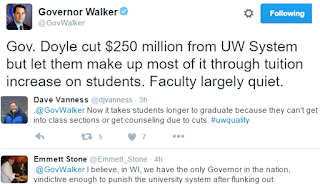 Scott Walker blasts professors as UW-Milwaukee faculty vote 'no confidence' in leaders … Walker followed his statement with a series of tweets in which he chided faculty for speaking out after recent changes to tenure, but not taking as strong of action in response to student tuition increases or previous UW funding cuts.

Getting even with the nationally respected University of Wisconsin is something the national media should covering. Who does that? What screwball would use the cuts states had to deal with during the Great Recession as a failing of the party in power at the time, like Democratic Governor Jim Doyle?

UW-Milwaukee became the fourth University of Wisconsin System campus to see professors declare they have no confidence in UW's leaders Tuesday, in a vote that prompted Gov. Scott Walker to weigh in with sharp criticism of the faculty.


Walker: “Some faculty bodies ... appear more interested in protecting outdated ‘job for life’ tenure than about helping students get the best education possible.  The university should not be about protecting the interests of the faculty, but about delivering value and excellence to Wisconsin.”

Faculty members have insisted they aren't arguing that tenure should be a "job for life." Instead, they say, it is a principle that protects professors' academic freedom, and gives them the ability to do the kind of risky or potentially unpopular work that can benefit people's lives.

Nice employer right? Working for a state university that doesn't value or even care to protect their faculties interests...hey, come work for us, right?
Posted by John Peterson, Democurmudgeon at 5/10/2016 08:02:00 PM