Funny thing, at the same time Scott Walker accused Obama and the Justice Department of transgender bathroom overreach by the federal government...he and Rep. Jesse Kremer want a statewide law usurping local control to create their own policy?

Republican state lawmaker Rep. Jesse Kremer (R-Kewaskum) plans on renewing his push this year for a "bathroom bill" in Wisconsin similar to the one in North Carolina, which would limit people to entering bathrooms that match their birth sex. "Progressive activists have finally blatantly, and unintentionally, unveiled their real war on women." Kremer and Sen. Steve Nass said the measure was needed to protect all students' privacy and safety and reinforce “the societal norms in our schools.”


"The bottom line is issues like that need to be addressed at the local level. That's what we elect school boards for. It's not an issue the federal government should be involved in, nor should the state. It should really be left up to the local districts."

Or does Walker mean this, from last October: 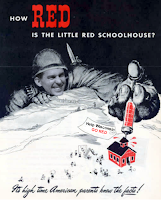 “I think it’s important to have some clarity about that and I know school districts around the state have just begun to deal with that,” Walker said of the issue. “I understand at least one school district has looked at a separate bathroom and I think that makes some sense but I think with respect to all the other students there’s got to be some clarity.”

Will the "incidental" governor sign Kremer's bill into law because, well it's there in front of him? Anything is better than Obama's overreach, right?

Turning the majority political party into a rightwing socialist sledgehammer is just one goal. Kremer's bill would not just target transgender Wisconsinites, it would also turn liberal supporters into intolerant bigots:

"In an attempt to appease a few individuals, these (liberal) extremists have overplayed their hand and we, as citizens, must stand up to their intolerance and bigotry," wrote Kremer.

The conservative public interest law firm, the Wisconsin Institute for Law & Liberty, criticized the mandate as an "abrupt change in long-standing practice" and an unconstitutional overreach by the Obama administration.

Who could have foreseen the “party of small government” requiring a birth certificate to go to the restroom, the ultimate in nanny state social engineering.

Adding insult to injury, Republicans continue to use the most conservative courts to peel back progress. The Justice Department’s lawsuits over N. Carolina’s law requiring people to use public restrooms that correspond to the sex on their birth certificate is now a battle they really want to fight?

"This is a question for the legislature or for the courts interpreting existing law and constitutional provisions," said Rick Esenberg, president and general counsel. "It is not a question to be resolved by a bureaucratic command backed up by the blackmail of withholding federal funding."

Is he describing withholding food stamps and unemployment unless a drug test is given? Just wondering.

Here's what the administration wants from our public schools:

The Obama administration directed schools to allow transgender students to use the bathroom that corresponds to their gender identity ... states that Title IX protects students from discrimination based on their gender identity. The Justice Department on Monday sued North Carolina over a bathroom access law that it said violates the rights of transgender people, a measure that Lynch likened to policies of racial segregation and efforts to deny gay couples the right to marry.