Does anyone really think Republicans work "hard" legislating a few months a year?

How "hard" is it to take pre-drafted GOP legislation by conservative think tanks, and make it law?

And yet Republicans beat up on teachers and professors who they say don't work long enough hours, not to mention all the stuff they take home with them every day. Oh, and don't get them started on those 3 month summer vacations.

Like Rep. Dale Kooyenga cluelessly said to a room full of educators the other day:


Kooyenga: "Sometimes what you need in a change, is you need to tell your teachers, listen, we're in a tight spot. We're all gonna get here at 7 am, we're not leaving 'til 5 pm. You need to do that sometimes..."

There's a certain arrogance and elitism our freeloading Republican legislators have tp make that kind of statement, as pointed out in the following tweet:

...and by coincidence I just ran across this interesting schedule, from our hard working Republican Senators in the nations Capitol: 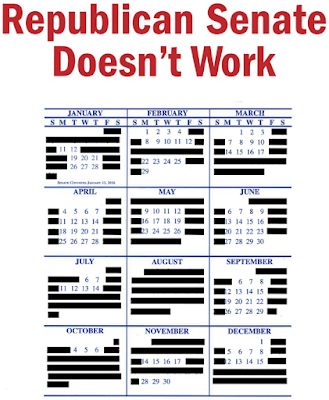 As for the Democrats? They spend their time trying to solve problems, sometimes creating a tax to pay for that solution. The horror. Someday they'll learn how stand behind their convictions and carry out an equally aggressive agenda like the Republicans.