This is Freedom? "The appeals court says while it may be alarming, openly carrying firearms without evidence of criminal or malicious intent is legal."

Feeling safer in our society is not the ultimate goal of our armed band of in your face gun rights strangers. They may feel safer, not safe, carrying a gun, but it's having the opposite effect on society. With armed strangers around, everyone else senses danger, and a limit on their own freedom to feel secure in their own community, their state and their country. We're screwed:


A Wisconsin appeals court has overturned the loitering conviction of a man who was walking near a school with a semi-automatic AR-15 rifle on his shoulder.

The following is anything but normal: 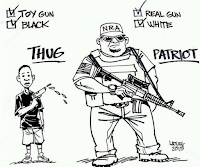 The St. Croix County Circuit Court should have dismissed the case because the evidence suggested the only reason Hoffman was stopped was because of the guns. The appeals court says while it may be alarming, openly carrying firearms without evidence of criminal or malicious intent is legal.

Alarming is okay now, thanks to an activist conservative Supreme Court decision overturning a century of reasoned 2nd Amendment decisions.
Posted by John Peterson, Democurmudgeon at 5/18/2016 10:22:00 AM