Walker's got us where he wants us, begging for more.

Scott Walker continues to treat us like a cheap date.

Let's  begin by saying...wow, I’m so not impressed by my tax cut, especially after Wisconsin had dumped public investments previous taxpayers spent billions of dollars building. We gave up state parks, DNR environment and wildlife protections, funding for the University of Wisconsin, investments in our kids K-12 education, local control of just about everything, and for what...?

Just $160 to vote again for Scott Walker. Of course I didn't see any of that money because Walker didn't keep down health insurance costs in the marketplace, by rejecting 20-50 increases in premiums. Oh and don't forget how many school districts voted for higher taxes to keep their schools open. But hey, Walker and his band of legislative plundering pirates weren't the ones who increased taxes, blame your local officials.

The fact that lower income families got the biggest percentage of the 2013-14 tax cut is no big deal folks, even though the media will play that up. That's just $55. 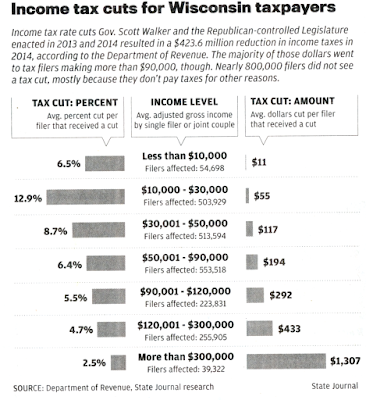 This is the price of "freedom and liberty" under Scott Walker. A fire sale of public investments for a measly 55 to 117 bucks.

The chart above should have been paired with corporate tax savings, and the devastating depletion of our general revenues because of them. But its not over yet, because as we all know, Walker needs to provide a tax cut in every budget, even if it's just an insulting $1 a year. It's ad campaign gold.

And in rare instance of honesty, Rep. Dale Kooyenga said he never intend to help the poor:

Rep. Dale Kooyenga, R-Brookfield, one of the chief architects of the tax cut package, said the tax code is now more progressive than when Democrats were last in control of state government, something he said Republicans weren’t initially intending to do.


“We set out to cut taxes in proportion to the taxes being paid. What happened is it was compromised in the process. We ended up cutting taxes more for people who pay less in taxes (in percentage terms).”

Wisconsin wage earners and state coffers saw a $423.6 million reduction in income taxes as a result of rate cuts enacted in 2013 and 2014, according to new data from the state Department of Revenue. That’s about $30 million more than the nonpartisan Legislative Fiscal Bureau estimated in July 2014.