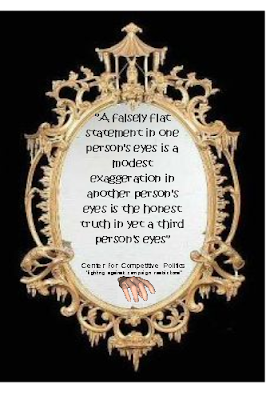 Republican orthodoxy dictates that all things are relative. Fabrications and lies have equal weight when compared with reality and the facts. Both arguments are part of the ideological battle of positions, taken by each side, and have equal weight. Boy, doesn’t that sound well thought out?

To show how “down the rabbit hole” this concept is, take a look at this pathetic partisan just elected to the Wisconsin Supreme Court, as told by the Milwaukee Journal Sentinel:
No other Wisconsin judge has faced the ethics violations now confronting Supreme Court Justice Michael Gableman … no judge has ever faced Judicial Commission allegations that he or she made false statements about an opponent. The commission filed a complaint Oct. 7 alleging a campaign ad Gableman ran in March made false statements about his opponent, then-Justice Louis Butler.
Gableman has indicated he will fight the accusation on First Amendment grounds … If he maintains that position throughout the proceedings, that could mean he would have to answer questions under oath.

At issue is an ad by Gableman that said: "Louis Butler worked to put criminals on the street. Like Reuben Lee Mitchell, who raped an 11-year-old girl with learning disabilities. Butler found a loophole. Mitchell went on to molest another child." As a public defender, Butler won an appeal for Mitchell, but the state Supreme Court ruled that Mitchell had to stay in prison. He did not commit the subsequent crime until after he was paroled.

Gableman argues that the U.S. Supreme Court has ruled that political speech must be judged on its literal meaning, not on impressions … Campaign consultant, Darrin Schmitz; "The allegation skips over the fact the plain language of the ad is truthful," Schmitz said in a statement. "This is an unprecedented attempt to punish someone for making a truthful statement, which sets a very dangerous precedent."
Did you get that? The disconnected statements are true if taken individually, but when they're put together, mean something completely different. And that's okay to Justice Gableman. Dr. Suess, here we come…
A 2002 U.S. Supreme Court decision appears to help Gableman … said a Minnesota judicial code could not preclude judges from publicly stating where they stand on controversial issues such as abortion … But New York University law professor Stephen Gillers, who has written on judicial ethics, said judicial disciplinary cases are not subject to the same First Amendment deference that other legal matters are. "There's no First Amendment right to lie to voters in a contested election," he said.
James Sample, counsel for the Brennan Center for Justice at NYU, said one can argue the ad is true only "if you have no respect for the constitutional right to counsel."
Get ready now, here’s where we try to follow the Republicans “everything is relative, everything might be true” delusion through the looking glass:
Sean Parnell, president of the Center for Competitive Politics, said the government shouldn't judge campaign speech. The group fights campaign restrictions.
"A falsely flat statement in one person's eyes is a modest exaggeration in another person's eyes is the honest truth in yet a third person's eyes," he said.
Wouldn’t that make a great bumper sticker? As soon as I post this, I’m making a wall plaque so I can proudly display this mind numbing Republican “Mad Hatter” logic. God are they really this nuts?
Posted by John Peterson, Democurmudgeon at 10/28/2008 12:31:00 PM