If You Thought Stiletto Heels Were Dangerous, Try a Gun 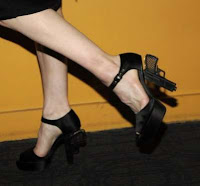 I'm not really into the "What not to Wear" and "Project Runway" phenomenon, but I know bad shoes when I see 'em.

I personally would love to see a ban on hand guns, a position I recently changed since getting abused by the gun lobby after they took advantage of my generosity, but I have mixed feelings about making firearms a shoe accessory.

Here's the outrage and lowdown:

Chanel’s creative director Karl Lagerfeld was inspired to create the gun toting footwear by an image of a gun he saw and then gave to Chanel’s shoe designer Laurence Decade and told him to make the heat-packing shoes.

Lyn Costello, from MAMAA told Metro: "I am horrified that Madonna can see these shoes as fashion. "As a mother herself I would have thought that she would have paused for a second and thought about all the young people here and in her own country that have died because of gun crime. "It's uncaring. Surely she reads the news and realises that young people are dying every day (femalefirst)
Posted by John Peterson, Democurmudgeon at 10/17/2008 03:24:00 PM