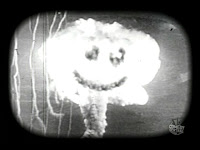 So Al-Qaida is now supporting John McCain as our next president because he's "impetuous."
Since the terrorist organization had endorsed a Democratic president before, and it wasn't a ploy to make John Kerry look bad so George Bush could get re-elected , it should be interesting to hear the McCain campaigns explaination this time around.
AP:
Al-Qaida supporters suggested in a Web site message this week they would welcome a pre-election terror attack on the U.S. as a way to usher in a McCain presidency.
The message, posted Monday on the password-protected al-Hesbah Web site, said if al-Qaida wants to exhaust the United States militarily and economically, "impetuous" Republican presidential candidate Sen. John McCain is the better choice because he is more likely to continue the wars in Iraq and Afghanistan. "This requires presence of an impetuous American leader such as McCain, who pledged to continue the war till the last American soldier," the message said.
"Then, al-Qaida will have to support McCain in the coming elections so that he continues the failing march of his predecessor, Bush.""If al-Qaida carries out a big operation against American interests," the message said, "this act will be support of McCain because it will push the Americans deliberately to vote for McCain so that he takes revenge for them against al-Qaida. Al-Qaida then will succeed in exhausting America till its last year in it."
Mark Salter, a senior McCain adviser, said he had heard about the Web site chatter but had no immediate comment.
The McCain Campaign response:
Washington Post: Aides blasted a report published in today's Washington Post quoting commentary on an Islamic extremist Web site that "Al-Qaeda will have to support McCain in the coming election," saying that The Post had relied on a "blogger" whose connections to al-Qaeda were questionable. And the McCain team accused The Post of running an "inflammatory" headline while ignoring words of praise for Barack Obama from other Middle East leaders.
Randy Scheunemann, the campaign's top foreign policy adviser, read reporters several statements of praise for Obama from a leader of Hamas, the president of Iran and the leader of Libya.
Of course, they aren’t Al-Qaida, the ones responsible for attaching the U.S.
Former CIA director Jim Woolsey, also a McCain adviser, added: "It is ridiculous to believe that in its heart of hearts that al-Qaeda wants John McCain to be the president. It's ludicrous."

It seemed just as ludicrous when they endorsed John Kerry. Can these guys have it both ways?
Posted by John Peterson, Democurmudgeon at 10/22/2008 12:41:00 PM