NRA and Republican Racists Might Be a Wake- up Call? 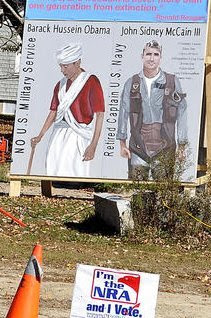 An in-depth article from the Portland Press Herald on Oct. 23rd reported that a citizen in New Gloucester, Maine erected a large sign depicting Sen. Obama in a traditional Somali dress compared to an image of Sen. McCain in a Navy flight suit, on the right.

Below, as posted in Newsweek on Oct. 23rd, FactCheck.org skewered the NRA's grossly misleading and blatantly false ad:

Factcheck.org:
The new ad shows a terrified woman grabbing a gun after an intruder smashes his way into her home. It accuses Obama of voting repeatedly for a measure that would "make you the criminal" in such cases, and voting to "deny citizens the right of self-protection."

The NRA says the incident depicted is "a true story." Not quite.

The actual 2003 burglary didn't involve a woman, and it didn't become violent until the male homeowner went downstairs and started firing before calling police.
The ad fails to mention that the issue was a local handgun ban that made the homeowner's gun illegal to keep in the house.

What Obama voted for was not any general repeal of the right of self-defense, but to uphold enforcement of the local gun ban, a "petty offense" that carried a maximum penalty of a $750 fine.
Posted by John Peterson, Democurmudgeon at 10/26/2008 04:59:00 PM