Neo-liberal Trade a Failure too. It Seems Free Marketeers are Wrong Again 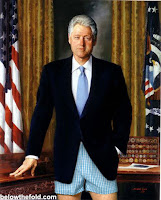 So I was right after all. Actually a lot of people were right, and criticized for supposedly blaming America first, when we called for a change in our trade policies. Bill Clinton admitted as much yesterday.

(AP) Today's global food crisis shows "we all blew it, including me when I was president," by treating food crops as commodities instead of as a vital right of the world's poor, Bill Clinton told a U.N. gathering on Thursday.

The former president also saluted U.S. President George W. Bush - "one thing he got right" - for pushing for a change in U.S. food-aid policy. He chided the bipartisan coalition in the U.S. Congress that killed the idea earlier this year.

Clinton took aim at decades of international policymaking by the World Bank, the International Monetary Fund and others, encouraged by the U.S. that pressured Africans in particular into dropping government subsidies for fertilizer, improved seed and other farm inputs, in economic "structural adjustments" required to win northern aid. Africa's food self-sufficiency subsequently declined and food imports rose.

Now skyrocketing prices in the international grain trade - on average more than doubling between 2006 and early 2008 - have pushed many in poor countries deeper into poverty.

"Food is not a commodity like others," Clinton said. "We should go back to a policy of maximum food self-sufficiency. It is crazy for us to think we can develop countries around the world without increasing their ability to feed themselves."

Canada, for example, requires that 50 percent of its aid go as cash - not as Canadian grain - to buy crops locally in Africa or other recipient countries. But U.S. law requires that almost all U.S. aid be American-grown food commodities, benefiting U.S. farmers.

Clinton also criticized the heavy U.S. reliance on a food crop, corn, to produce ethanol for fuel, which helped drive up grain prices worldwide. "If we're going to do biofuels, we ought to look at the more efficient kind," he said, referring, for example, to the jatropha shrub, a nonfood source that grows on land not suitable for grain.

Neo-liberal trade policy are about as practical as unregulated free markets.
Posted by John Peterson, Democurmudgeon at 10/24/2008 11:57:00 AM