Wall Street Bears Get the Gimmies, Give Up Free Market Capitalism in a BIG Way 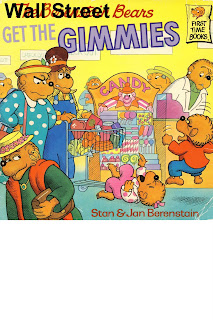 I guess once the taxpayers broke open their piggy bank, the eyes of corporate power wanted more.

The American taxpayers are now suddenly expected to dole out the bucks to private and public industries that made big marketing and management mistakes so they can keep employing us.
This story really is the final nail in the “laissez-faire capitalism” coffin. Maybe now the Ayn Rand wanna be’s can let her and her idea’s R.I.P. The CBC put this sermon together:

Reuters: General Motors and Cerberus Capital Management, which owns Chrysler, have asked the U.S. government for around $10 billion US in an unprecedented rescue package to support a merger between the two car companies.

Separately, Canadian auto parts makers have asked the federal and Ontario governments for "immediate, short-term, low-interest loans" to survive the credit crunch. "Assistance is required immediately if our country has any hope of salvaging a once vibrant and prosperous industry," said the president of the Automotive Parts Manufacturers Association Canad.

In Washington, the White House reiterated Tuesday that U.S. automakers may be eligible for the Treasury's $700 billion US financial rescue package.

Separately, the Associated Press reported that the $700 billion US financial bailout has become the biggest lobbying target in the U.S. capital.

Automakers, insurers, securities dealers and American subsidiaries of foreign banks all want the Treasury to cut them a piece of the largest government rescue in U.S. history, and the betting is that many will be successful amid faltering financial markets and predictions that the economy is heading into a deep recession, AP said.

A decision by the Bush administration to provide the government's first funding for the auto sector since the $1.5 billion US bailout of Chrysler in 1980 has been widely seen as the merger's best chance for success.

Now, in addition to taking a stake in what would be the world's largest automaker by volume, the U.S. government is also being asked to provide support by taking over some $3 billion in pension obligations, the first source said.

The final component of the proposed support would be a credit line that could include U.S. government purchases of commercial paper to relieve short-term pressure on liquidity.