Benedict Powell Pic None Too Subtle. Are Republicans Losing Their Touch? 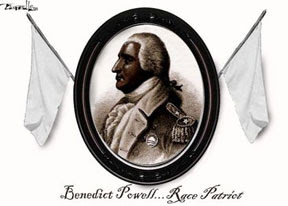 Politicker reports Campbell also stated that Powell “wishes to see someone who looks like himself in the White House.” Similarly, Rush Limbaugh is now saying that Powell endorsed Obama only because they are both African-American, and a prominent Maine GOP activist claimed, “If Obama was a white man, Powell would not have made the endorsement.”
Posted by John Peterson, Democurmudgeon at 10/20/2008 10:18:00 AM