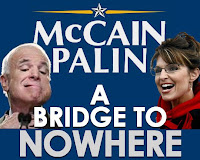 I have never understood why the media hasn’t been asking this question: Is the current scorched earth campaign a demonstration of working with Democrats?
AP describes John McCain this way:

A rabble-rouser from his earliest days, John McCain has never been one who likes to be told "no." There's no reason to think a President McCain would be any different. Look for him to throw down the gauntlet in a few high-profile battles - vetoing legislation larded with pork-barrel projects.

He's already promised to make an example of legislators who try to finagle government dollars for pet projects without thorough review, saying over and over, "You will know their names. I will make them famous."

Here’s the clincher for me:
As a candidate, McCain has stressed his ability to work with congressional Democrats…
Really? Making an example of legislators that add on earmarks, “you’ll know their names, I will make them famous,” is a good way to get along with Congress and govern from the middle?
What an amazing ability Mr. McCain.
As for the rest of us in the general public, simple statements of confidence should be enough to keep us satisfied. While Barack Obama has been required and badgered into giving out every detail of his plans for economic stability and foreign policy, Republican McCain is held to a different standard.

Finding Osama bin Laden? "I'll get him no matter what, and I know how to do it."

Financial chaos? "The point is we can fix our economy."

What about the triple challenges of health care, energy policy and entitlement reforms? "We can do them all at once."

Let me see if I have this right; McCain has the solutions, whatever they might be, and Democrats have to go along with them because Republicans know what’s best for us anyway.
I guess I missed the memo where we can just assume the myths of confidence and competence are born into conservative big thinkers.
Posted by John Peterson, Democurmudgeon at 10/18/2008 11:59:00 AM