It's true that the media is going way overboard covering the sparsely attended pandemic denier protests begging to go back to work, just like the media did with few obnoxious Tea Party losers disrupting town halls so people couldn't get affordable health care.

A Marquette University Law School Poll, released April 1, found 86% of Wisconsin registered voters surveyed said that "it was appropriate to close schools and businesses, and restrict public gatherings" to cope with the coronavirus pandemic.

The silent majority following Evers' order and staying home vastly outnumber the people who are protesting.

We can't believe what we're seeing, right? The drooling primitives known as Trump cultists are hoping a few thousand sacrificial people will bring about a healthy economy, kind of an extreme version of sacrificing someone to a roaring volcano. 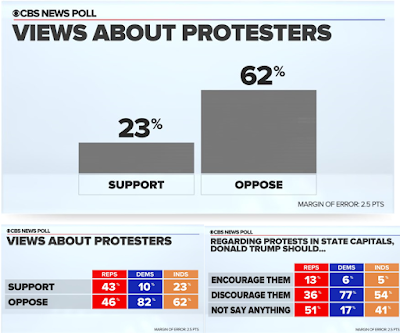 So yes, the "accident" is fascinating to watch, especially with signage like this demanding shopping over life itself:

Utilizing the same tactics Republicans were so outraged about during the Act 10 protests in the dead of winter, what they angrily called "intimidation," COVID-19 deniers will now defy the same laws their hero Scott Walker put in place. You can't make this stuff up:


Despite having their permit rejected by Gov. Tony Evers' administration, organizers of Friday's rally to reopen the state said they plan to move forward with their event on the grounds of the state Capitol in Madison. "We're going to peacefully assemble," Madison Elmer told the Journal Sentinel Wednesday. Elmer said the email stated: "Due to do the Wisconsin Department of Health Services safer at home order the permit request is being denied."

As for those supposed notorious "out-of-state" liberal "provocateurs" defending employee rights, Pandemic gun-rights protesters bearing arms from Minnesota will infiltrate our state politics by setting their laser-focused sites on safe-at-home families trying to stay alive. Now it's just fine to let out-of-staters tell us what to do:

...a third group, led by Ben Dorr of Minnesota Gun Rights, has called for a "drive-in rally, operation gridlock."


Walker answered: "People should not be coming into the state trying to intimidate lawmakers, offer up threats or anything else. That’s just not the way it’s done, at least not in the Midwest. And thankfully, again, our lawmakers stood up to those sorts of thuggery attacks, and we’re not going to allow that here in the state of Wisconsin … But the people coming in from other states, that bring these sorts of tactics, just don’t belong here."

Even more indefensible, was this shocking interview from August 2013 between former candidate to the State Supreme Court and law professor Ed Fallone, and loony tunes conservative pundit Kevin Hermening, who trashed protesters...yup, just like the ones we'll see protesting their right to shop during a pandemic.

Here's some audio of Scott Walker's disapproval of out-of-state protesters silencing Wisconsinites. Keep in mind, this was enormously overblown and many times just made up, suggesting local protesters asked for their help:

Let's take a look at these "smart" protesters ignoring social distancing and not wearing masks to simply protect their fellow protesters. They talk about the risks, but think 2 weeks is enough?

Because things aren't getting worse? 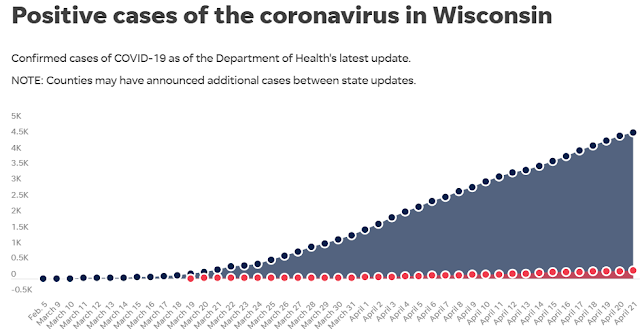 Think Gov. Evers would be even more tyrannical if he said what Walker did below: