The Trump Death Cult is real, and all they needed to stir resentment was the tweet "Liberate..."

Let me start with the bottom line I've been ranting about for years: Republicans don't solve problems. Period.

After Scott Walker the iron fisted control of our gerrymandered GOP majority, all we have left is a conservative wish list devoid of Wisconsin problem solving. Here's my partial list...:


The coronavirus pandemic requires us to unite for our own safety, but members of the Republican Party can only see the world in partisan terms. Boston College political scientist David Hopkins notes that “The contemporary Republican Party has been built to wage ideological and partisan conflict more than to manage the government or solve specific social problems.”

The Solution: Mass testing! But that takes work and planning, so Trump-inspired Republicans picked a specific date and targeted Democratic governors for protests to energize the voting base. Isn't that much easier?

The New Tea Pandemic Party Emerges: The Trump cult voters are ironically wallowing in big government edicts spewed by Trump, like the pandemic bailout checks of $1200 I'm sure they're all sending back. Yet as crazy as it sounds now, they opposed Obama's stimulus coming out of the Great Recession and later raged against giving more Americans health care through the Affordable Care Act. 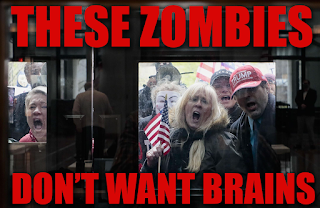 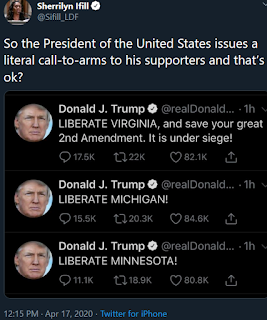 Marathon County resident Larry Pabst said Evers’ order is an example of government “stepping in where it doesn’t belong.  State residents, and not government officials, should decide whether they can go to work or attend gatherings. I don’t think anyone should be able to tell me where I can and can’t go,” he said.

“We’re angry. We are frustrated and we are trying to push back in every way we can,” Assembly Speaker Robin Vos, R-Rochester said Friday during an interview with WISN-AM (1130). Vos said he does not believe the governor has the ability to shut down the economy, adding the differences between essential and non-essential businesses appear arbitrary. He said a legal plan would be ready next week.

A married couple from New Berlin …“It is happening – COVID-19 is out there ... I think it’s just a decision people should be able to make on their own. And if you come down with it and you die, well then that’s on you. It’s a decision that you have to make. If I die because I came here today, well, I guess...” She shrugged. 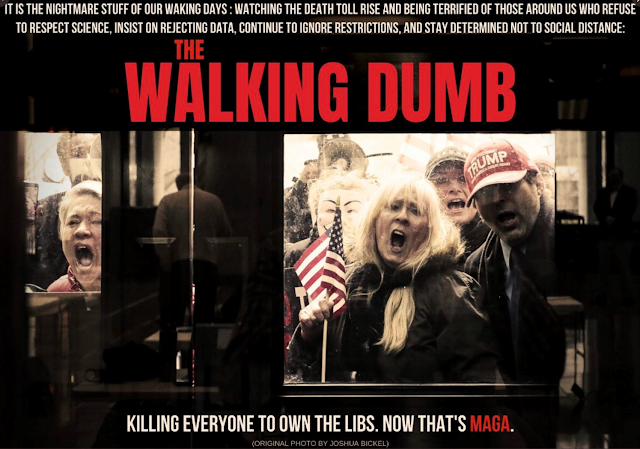 Killing kids...Dr. Oz clearly laid out an "appetizing opportunity" for school age children to be sacrificed:

The Death Panel is now Real: 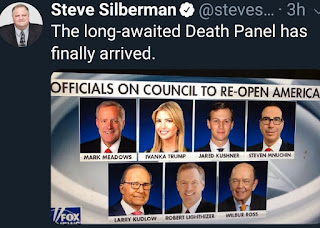