Pretty soon, we won't even need a governor! True.


Here's the Vos/Fitzgerald bottom line, again, you can't make this kind of arrogance up: 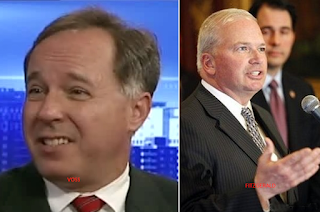 JSOnline: The GOP plan comes less than two years after Republicans passed lame-duck laws that trimmed Evers’ authority even before he took office. Seeking to further curb Democratic Gov. Tony Evers’ power, Republican lawmakers are proposing to give a handful of lawmakers the ability to cut school aid and slash state spending if a deficit materializes.

Oh, they want all the power, and go after all those coronavirus afraid freeloaders...

The power they are seeking is vast. It would allow them to reduce aid to schools, local governments and University of Wisconsin campuses. They could also scale back programs aimed at helping the poor and those who have trouble getting health-care coverage.

"It sounds like they're making Finance a mini-legislature," Democratic Sen. Jon Erpenbach of West Point said by text message.

Will Somebody Fire these Whiners? If that weren't bad enough, with little to no major gaffs to criticize, again Republicans simply have to try and make things up. Remember Obama's "terrorist" fist jab, tan colored suit, or professorial delivery of policy ideas? Yup, compared that to Trump's sh** show...seriously?

Boohoo, whine, bad governor they say! Let me get this right; governors have never threatened vetoes if certain items are included or not included in legislation? Didn't think so.
Here's another obvious lie and deception making it seem like they're "working with" Democrats:

Republicans did not collaborate with Senate Democrats on the proposals (BUT) "We’ll keep working with the minority party to put together a bill...,” Fitzgerald said.

Can't Criticize Republicans Anymore Pt. 2: While Gov. Evers said he would likely veto a bill leaving him out of spending cut decisions, that simple critical observation was..."damaging the effort" to provide relief for the state:


Assembly Majority Leader Jim Steineke, R-Kaukauna, said by releasing and criticizing a portion of the package, Evers was damaging the effort on behalf of GOP and Democratic legislative leaders to reach a bipartisan package to provide relief for the state.

And during the spread the COVID-19 pandemic, killing Wisconsinites, is it too much to give the DHS spending power?

Leaders said Evers' proposal was a nonstarter in large part because of a provision would provide the state Department of Health Services unlimited spending authority during the public health emergency.

What Gov. Evers has simply asked for and is now being exploited by Vos/Fitzgerald?


The legislation would suspend a one-week waiting period to receive unemployment benefits, and allow the state to claim an extra $150 million every three months in federal aid for the state’s Medicaid programs such as BadgerCare Plus.


The governor said Wednesday if lawmakers don't take action within two weeks they would be telling residents that state officials don't know how to respond to the pandemic.

Another really bad Republican idea during a pandemic:


This week Rep. John Nygren, a Republican from Marinette who is co-chairman of the finance committee, said the state may need to freeze spending after July 1. Congress has allocated about $2 billion to Wisconsin to help fight coronavirus. Evers — not lawmakers — has control of how to spend that money.

It does not include many of the major proposals in Evers' first proposal, including $10 million to hire 64 new staff at the Department of Health Services and an unlimited spending authority for the agency during the outbreak.