According to our angry tyrant, Trump, the presidents power over governors is TOTAL:

Even a Conservative group's Ad disagrees with Trump:

…and overrule governors stay-at-home "tyrannical" restrictions, use FEMA to confiscate all PPE's and ventilators, and withhold pandemic help to Democratic governors states, disconnected Republicans in Wisconsin are outraged over Dem Gov. Tony Ever's attempts to stop a spreading killer virus. It's an emergency power he has...for now. They're calling him a...tyrant?


Wisconsin Republicans reacted with anger to Evers' extension, threatening lawsuits, the firing of his health secretary and other curbs on his power. More than 1,400 people said on Facebook that they planned to attend a rally at the state Capitol on April 24, the day the original order was to end, demanding that Evers reopen the state. Rep. Barb Dittrich, of Oconomowoc, called Evers a “tyrant.”

The lower conservative life form wants to reopen the state with no plan, no mass testing, no contact tracing, no anything!

Like I said, let every reckless freedom and liberty fighting heavy breathing Trump cultist go back to work for us, and we'll see how that works first.

81 percent of Americans in a recent poll agree with continued social distancing, and only 10 percent want to irresponsibly go back to work.

Keep in mind, our overlord Republican majority who took most of the Governor's and the AG's power away before they took office, have not approved many of Gov. Evers appointments in an attempt to silence their possible criticism of the GOP legislature. And guess what, Republicans aren't shy about using that authority to remove those who disagree and don't follow in lockstep:


The state Senate which has yet to confirm Department of Health Services Secretary Andrea Palm and could vote to fire her. The Senate has already fired Evers' agriculture secretary.

“She must not be allowed to continually trample on the constitution or the state’s economy,” Republican Sen. David Craig said of Palm. “Enough is enough!”

In Car Protest...and the not so Brave Conservative Cowards: Since Wisconsin conservative crackpots never had an original thought of their own, they copy cat others. If the economy has to open up without any real "freedom and liberty" pandemic restrictions, well, get the hell out of your cars.

The planned rally next week at the Capitol comes after similar events in Oklahoma and Michigan attracted thousands. Evers said he respected the protesters' free-speech rights, but he hopes they remain 6-feet apart from one another so they stay healthy.

Who paid for this stunt?

The Bullwork put it this way, from the Washington Post: 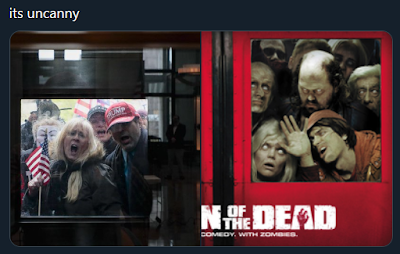 And so on the umpteetnth day of the Great Lockdown, the masses finally rose up. Or something.


For miles, thousands of drivers clogged the streets demanding Michigan Gov. Gretchen Whitmer (D) ease restrictions and allow them back to work. They drowned downtown Lansing, Mich., in an cacophony of honking. They blared patriotic songs from car radios, waving all sorts of flags from the windows — President Trump flags, American flags and the occasional Confederate flag.

But in the massive protest Michigan Gov. Gretchen Whitmer’s stay-at-home executive order — which they have argued is excessive and beyond Whitmer’s authority — the pleas from organizers that protesters to stay in their vehicles went unheeded. Many got out of their cars and crashed the front lawn of the capitol building, with some chanting, “Lock her up!” and “We will not comply!”

It’s easy to dunk on this sort of thing as yet another vector of wingnuttery, especially because it is potentially dangerous to public health. But, it's also worth recognizing that populist libertarianism is a thing and completely compatible with Trump's proto-authoritarianism.

Conservative voters, any chance you might want to stop these losers in November.
Posted by John Peterson, Democurmudgeon at 4/16/2020 07:05:00 PM