For Republicans, it really is like flicking a light switch, just the opposite of what they say they're not doing...


CapTimes: Sarah Mattes, the communications supervisor for Public Health Madison & Dane County said, “We understand that people are frustrated, but during a pandemic, a mass gathering is a dangerous way to express frustrations.”

Wisconsin Republican leadership Sen. Scott Fitzgerald and Rep. Robin Vos never get around to mentioning the disease itself, and certainly, have no plans to help increase testing or contact tracing...just get-back-to-work. Why? Because they don't solve problems, and because it requires actual "work" to come up with a plan.

Check out WMC's proposed plan endorsed by Republican Sen. Chris Kopenga that didn't contain one suggestion to ramp up testing and contact tracing for COVID-19, like it doesn't exist, but it does seek "health care capacity" after the fact just in case things don't work out.

The "emergency rule" making powers of the governor appear to include an automatic 150 day period (An emergency rule remains in effect only for a period of 150 days), not just the 60 days that Sen. Scott Fitzgerald is whining about. And Evers could extend the rule after 150 days in 60-day increments. Still...

Vos said he and Fitzgerald resisted calls to repeal the governor's 60-day public health emergency, which expires on May 12.

Which is BS bluster, because they're now trying to take the emergency rule away from the governor completely in their lawsuit before the State Supreme Court.


From Upfront, Fitzgerald never mentions controlling COVID-19 and is clearly just making it up as he goes along with insipid and petty excuses that are almost laughable, like;


1. Oddly assumed 60 days is enough time for a pandemic;

2. The "separate set of statutes?" IS the Governors emergency rulemaking power;

3. Whines the Sec. of Health could do anything she wants to do...at Evers direction...huh?;

4. Whether the 60 days rule in the statute is even constitutional;

5. No plan from GOP, "nothing in concrete yet;"

6. Evers adopted Trump standard that was just "dreamed up" by Evers to beat back criticism;

8. Pandemic elections resulting infections dreamed up and not verified because they don't have a tracing program;

9. "Until they have a tracing program in place, it's pretty hard for me to believe anything that has been used to link the two right now."

Interpreting statute is above my paygrade, but I'm also pretty sure once Evers works out a plan with the legislature, nothing he wants to do based on science and medical experts will happen without approval from our power-grabbing Republican authoritarian deniers. Note: Robin Vos said "...not necessarily to stop the response to the pandemic..." but that apparently is the hope:

"The reason we're filing the lawsuit is not necessarily to stop the response to the pandemic ... it just says like every other proposal in a democracy, the legislative branch negotiates with the executive branch and the best ideas are brought forward."

Vos in Charge? Hope not: Thanks to Rep. Robin Vos, Republicans finally got rid of medical lawsuits completely, for at least a few months...not kidding: 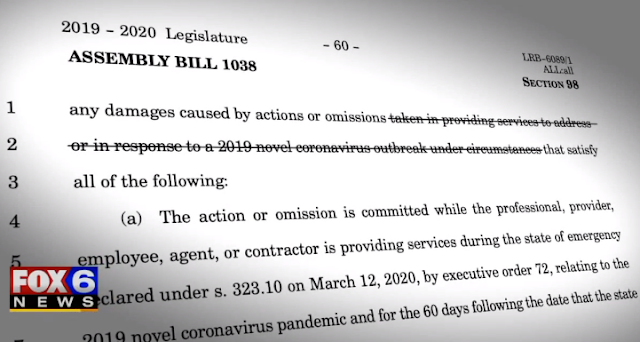 The bill originally said a health care provider would be immune from civil liability for "actions or omissions taken in providing services to address or in response to a 2019 novel coronavirus outbreak [emphasis added] ... in order for the health provider to qualify for immunity, the action must occur, in part, while "providing services during the state of emergency declared under s. 323.10 on March 12, 2020, by executive order 72, relating to the 2019 novel coronavirus pandemic [emphasis added] and for 60 days following the date that the state of emergency terminates."

The end result was a bill that went to the Senate, saying a health care provider is immune from civil liability for death or injury or for "actions or omissions" if the provider, in part, is "providing services during the state of emergency declared under s. 323.10 on March 12, 2020, by executive order 72, or the 60 days following the date that the state of emergency terminates."