"Dictator" Evers delays Election Day to June 9th, Vos/Fitzgerald cry like babies to the State Supreme Court...and get their way!!!

Wisconsin’s plan to hold an election in the middle of a pandemic is back on! On a party-line vote, however, the Republican-controlled state Supreme Court struck down Evers’s order, meaning that the state is now on track to hold its election as originally scheduled ... the U.S. Supreme Court delivered a second blow to the Democratic governor by tightening limits on which absentee ballots can be counted. Under that 5-4 order, voters will have to mail back their absentee ballots by Tuesday, go to the polls that day or give up their opportunity to vote.

Writing for the court's liberals in dissent, Justice Ruth Bader Ginsburg concluded thousands would be "left quite literally without a vote" because their absentee ballots wouldn't arrive at their homes until after election day — too late to cast them. "If a voter already in line by the poll’s closing time can still vote, why should Wisconsin’s absentee voters, already in line to receive ballots, be denied the franchise?" she wrote.

WOW, this is a big problem...guess the US Supreme Court didn't do their homework. Will Vos/Fitzgerald throw a hissy fit over this? Yea, right: 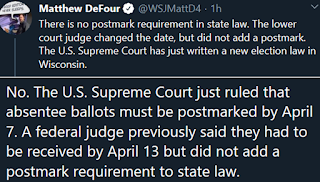 Voter Suppression by Coronavirus Pandemic, exploiting tragedy?: Activist Court legislating from the bench? Sure. This was always a sure thing. Anything to suppress votes to maintain Scott Walker's appointed Justice:


As law professor and election law expert Rick Hasen recently noted, “only 38% of voters who had requested an absentee ballot in heavily Democratic Milwaukee County had returned one, compared with over 56% of absentee voters in nearby Republican-leaning Waukesha County.”

The Democratic reaction? Shoot me now..."disappointed?"

And the Vos/Fitzgerald response, hey, they wanted you to vote absentee but thems-the-brakes:

Fitzgerald and Vos said after the court's ruling, “The safety and health of our citizens have always been our highest concern; that’s why we advocated for everyone to vote absentee."

Will those who voted in person and a week later found positive with the COVID-19 virus blame Republicans, and will that be provable  in a lawsuit? Also, will Republican voters think this was okay? I know, that's expecting. Pandemic's, public beheadings...who knows.

Our better angels won this one...

Perhaps Evers had one other choice...:

But just a few days ago, Republican leaders Robin Vos and Scott Fitzgerald said voting during a pandemic, and risking your health, was no different than ordering takeout:

Today Vos/Fitzgerald will utilize their conservative activist State Supreme Court to force people into large gatherings at the now dramatically reduced number of polling places. What could go wrong: 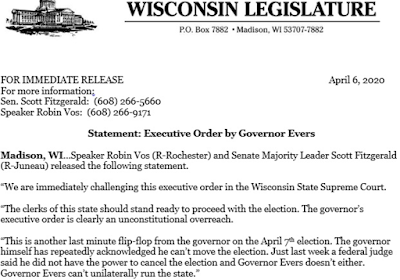 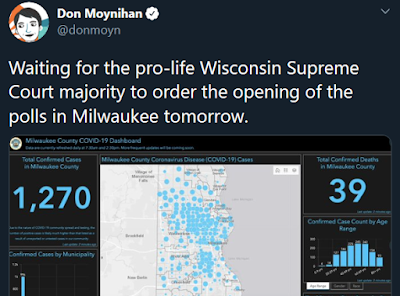 At the same time, Trump cultists are taking a break from bowing to their Orange God to attack Gov. Evers for his election day delay, during a pandemic that's killing people, calling him a dictator. This is the best most ridiculous comment: 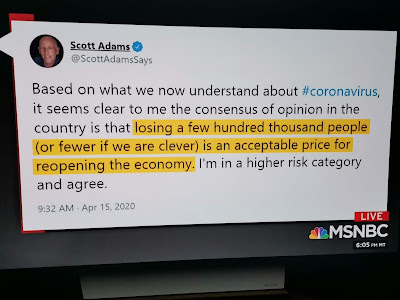 This morning, NPR told the rest of the nation just how brutal Republican are here, in incredible detail by WPR reporter Laurel White:

I just had to throw this in. Republicans have an odd sense of humor...?:

When it comes to golf courses, the lawmakers asked that Evers allow them to reopen if they follow certain guidelines, including:
The lawmakers also developed additional guidelines that could be considered. Those include: