Trump Death Cult moves from Sacrificial Seniors to infecting or killing our Kids!!!

With just under 2 weeks of school remaining (1 week for seniors) after Gov. Evers stay-at-home order, I can't imagine what could be accomplished packing all those kids back into those buildings during COVID-19 pandemic. Can you? My son is a senior so I know what I'm talking about.

Our actual GOP COVIDIAN Legislators argued that after the safe-at-home order expires, and "safe for people to start going back to work," why can't our kids cram themselves into their schools again? The answer is obvious to any adult, but not for these rabid corporate ghouls just trying to ram their point home. This has "smart-ass" written all over it:

I'm pretty sure a medically confirmed viral infection meets the science and data bar set by these geniuses.

While talk show fabricators and Republican COVID deniers insist on science and data from our Democratic Governor, well, I guess that's just BS too:

The plague that has laid this country low, destroyed our economy and brought us to a place that no external enemy could have brought: this plague of experts. Yes, I am talking about Doctors Birx and Fauci.

I’m already seeing people pointing fingers at the president and complaining that he’s relied too much on these “experts.” Why can’t he hire the people who will be good and not beholden to the – largely left – political establishment? Which brings us to the real plague of experts. Sure, what happened in 2020 and taking our economy down to protect us from what will emerge in retrospect as a not particularly lethal illness is a problem. If we survive – we’ll survive, right – and there is still a Republic at the end of this, we'll need to talk about the plague of experts as a systemic problem.


Just like a virus takes over a healthy cell, eviscerates it, and turns into a factory to create more viruses, so the plague of experts has taken over all our systems of science, education and even the arts, and turned them into factories to turn out more phony “experts.”

Are we perfectly clear about conservative politics yet?

"Some of you might start to think about school openings," Trump said. "I think it's something they can seriously consider and maybe get going on it. The young children have done very well in this disaster that we've all gone through, so a lot of people are thinking about the school openings. There may be governors who are not ready to open their states but they're ready to open up their school system."

Trump's call came after 43 states, including Delaware, North Carolina and New York, recently ordered or recommended schools to be closed for the rest of the academic year, according to Education Week. Even America's five territories, Guam, Northern Mariana Islands, U.S. Virgin Islands, American Samoa and Puerto Rico, have indicated they will shut schools until the end of the academic year.

TV celeb Dr. Oz made it perfectly clear what students were really for:


Don't forget the "pro-life" Republicans who wanted to put your kids life in danger so they could "own" Evers. We have God to thank for booting Scott Walker as governor: 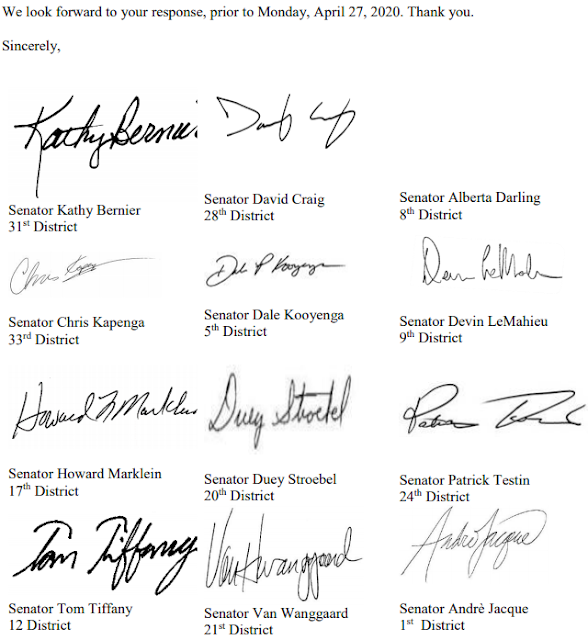