This wasn't just a disaster, it will happen again with the second installment currently being negotiated in Congress. Heartbreaking...NPR:

At least one business did not like the end result, and returned the money. 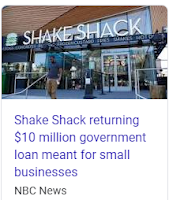 The federal government gave national hotel and restaurant chains millions of dollars in grants before the $349 billion program ran out of money Thursday, leading to a backlash that prompted one company to give the money back and a Republican senator to say that “millions of dollars are being wasted.”

Shake Shack, a $1.6 billion burger-and-fries chain based in New York City, received $10 million. After complaints company founder Danny Meyer and chief executive Randy Garutti announced that they would return the money. They said they had no idea that the program would run out of money so quickly and that they understood the uproar. The two wrote in a letter posted online: “Late last week, when it was announced that funding for the PPP had been exhausted, businesses across the country were understandably up in arms. If this act were written for small businesses, how is it possible that so many independent restaurants whose employees needed just as much help were unable to receive funding? We now know that the first phase of the PPP was underfunded, and many who need it most, haven’t gotten any assistance.”

So Trump cultists are fighting to go back to work despite the spread of COVID-19, but aren't aware that many of their employers were left out of funding because the Trump administration didn't care enough to oversee distribution. No criticism, just blind allegiance.
Posted by John Peterson, Democurmudgeon at 4/20/2020 06:37:00 PM