Vos/Fitzgerald say risk worth voting in person during COVID-19 crisis because it's "as important as getting take-out food."

It's hard to imagine a more surreal scheme where Republicans have to exploit COVID-19 deniers. They're actually encourage their constituents to gather at the polls, risking infection, to elect an activist dominionistic Justice and pass Marsy's Law, a poorly written invitation that gives corporations victims rights. It'll cost taxpayers money and give state government even more power.

Vos and Fitzgerald want to take advantage of a whole bunch of Trump cult voters seeking to own the libs and ignore the overblown COVID-19 pandemic. Plus, Democratic voting Milwaukee is going from typically 180 polling locations to just 5. Seriously? 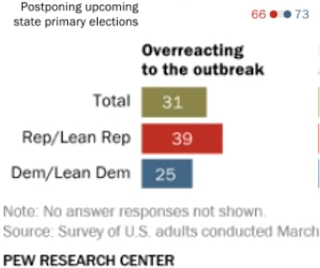 Below, WPR's Shawn Johnson sadly cleaned up the Vos/Fitzgerald reaction, leaving out the utterly brutal words that characterize these two sociopathic pirates. The quote is now burned in my brain: