The avalanche of excuses flowing out of Trump-like Republican blame shifters is now at such a shocking level that you would think media outlets would have notice?

Pandemic Exposed Lazy No Solutions Whiners: As I've written before, no one seemed to noticed how Gov. Scott Walker never solved any of Wisconsin's growing list of problems, which continues today with our safe gerrymandered Republicans legislature. Each one of the juvenile "can't do" whining's below avoids a problem or discounts a proven solution rolled out in other states.

It's so much easier to deny there really is a pandemic, than have to work hard solving the problem. GOP leaders are happy to jump on board the clown car parade, forget testing and downward trajectories. Hey, are these people from out of state?:

Even as the statewide stay-home order is working to stop the spread of COVID-19 and the virus curve is flattening, a right-wing conspiracy “news” site is promoting a mass gathering next week at the State Capitol in Madison to try to get Gov. Tony Evers to “open up Wisconsin.”

As of Thursday morning — the day after conservatives equipped with firearms, MAGA hats, and Confederate flags clogged the streets in Lansing, Michigan, for a similar protest — more than 750 people on Facebook have marked themselves as “going” to the Wisconsin event and more than 3,500 are interested. Members of a group called Wisconsinites Against Excessive Quarantine say forcing people to remain at home is hurting the economy and is no longer necessary to protect people’s health.

Just a thought, but shouldn't child services make a point of visiting this woman? Not only is she not protecting her kids with vaccinations, she had them carry signs to "reopen the playgrounds" without protective face masks: 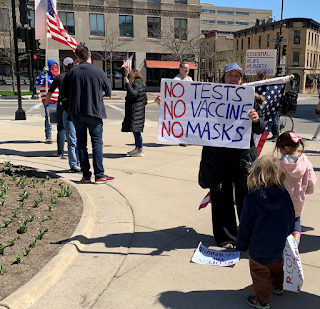 1. Mail-In Voting Statewide: 5 states have already converted to mail-in voting. If there is any problem getting a ballot, "Colorado allows people to cast a ballot at an in-person voting center during the early voting period or on Election Day ... (and) States also provide plenty of drop-off boxes." Still, despite the successful roll out of cost saving mail-in ballots, Republicans have imagined a whole list of phony excuses:

WSJ: Assembly Majority Leader Jim Steineke, R-Kaukauna, opposes the Democratic proposal (on mail-in voting) because of the cost, potential for fraud (voter fraud per capita is no higher, and often lower, in vote-by-mail states). For Steineke, such an overhaul isn’t worth it. “This idea that the system is broken and there’s no way to fix it is crazy.”

Oh, and about solving the problem of lost and returned ballots...you know, protecting a persons right to have their vote counted?:

They also balk at the mailing issues voters experienced with absentee ballots in April, and fear a primarily mail election could leave people with no recourse if they never received their ballot, because polling places would be reduced.(Again, Colorado solved that problem)

Voting Suppression Voter Purges...a thing of the past:


Steineke said he is concerned about 200,000 voters on the rolls may have moved. Ballot envelopes have bar codes that are unique for each individual voter, and only one ballot, the first one in, is accepted … States with all-mail elections are constantly updating their voter rolls, another benefit of all-mail elections.

2. Defy Stay-at-Home Democratic Gov. Evers Order: Death Party denialists are ignoring Trump's phase 1 plan for reopening some businesses that are still not in place in Wisconsin, and Republicans aren't willing to "spend money on" costly mass testing. NO Solution:

Anyone trust this owner of 3 pubs after hearing his whiny reasons to open? Again, Trump's 14 day downward trajectory and positive tests requirement have not been met:

Dan Zierath, the owner of Jackson's Blue Ribbon Pub in Wauwatosa said he will open the dining room to the public on May 1, in defiance of the governor's safer-at-home order that bans dining in at least until May 26 … questioning customers at the door if they've been exposed to COVID-19 or if they have fevers (no quick read thermometer?), but he was determined to proceed. "I feel like our constitutional rights are being taken from us. And I’m just not willing anymore. What’s going to happen is going to happen...I just see no harm in that whatsoever."

It's all about him and anecdotal support. Capitalist question; how will business insurers feel about picking up the costs and liability?

Asked if he had consulted an attorney in the matter, he said he had and was advised against opening the restaurant. "I have a ton of support on social media if we open," he said.

3. Passed Referendum prompts Pandemic Recount and Large Gathering: The Racine school districts referendum passed 5 votes, but that's not good enough, so up to 125 people will have to gather at Festival Hall during a pandemic. Why not? Recount reasons by anti-education parents were mindboggling and labored:


a. One petitioner said he did not believe all absentee or in-person ballots were counted.

b. Another said he believed ballots were changed to “falsely represent” the voter’s intended choice

c. and that poll workers persuaded certain voters to support the referendum.

d. another said he believed ballots that were improperly filled out or postmarked were counted when they should not have been.