Trump is the deathblow, creating an Illusion of government, filled with criminals to Dismantle and Accelerate profit and Consolidate Power

Here's my list of Wisconsin problems Scott Walker and his gerrymandered band of plundering Republican pirates never intended to fix.  They wanted to put in place a purely theoretical political agenda of fantastical laws that are now failing, now exposed by the COVID-19 pandemic. Republicans don't problem solve or fix societal problems, and never have:

Finally, others have noticed, like Jared Yates Sexton, the author of American Rule: How A Nation Conquered The World But Failed Its People and currently serves as an associate professor of writing at Georgia Southern University. Here's a link to his tweets:

For the Republican Party, a terminally ill political that functions as a death cult and clearinghouse for the destruction of our democratic institutions, it is exactly what they need: the illusion of solving a problem while refusing to address the problem at all.

Reagan began a forty year span of political ruin and created a fabricated reality … He served as the smiling face of trickle-down economics, a murderous perversion of our economy that doomed generations of Americans to stagnant wages, economic fear, and a litany of other horrors that would decrease their lifespans and keep them from achieving the mythical American Dream.

Hypercaptialism allowed corporations to grow into their own nation-states wholly independent from and removed from duty toward the United States of America. They are nationless and their abdication of taxes and loyalty has left America wanting for infrastructure, education, and, perhaps most tragically, healthcare.

"Trump is the Deathblow. He's not there to solve problems or save lives": 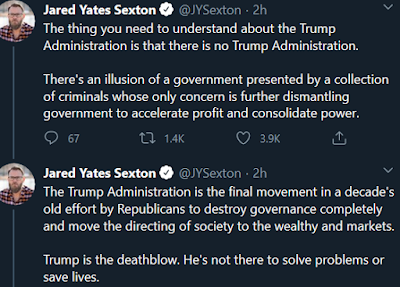 A pandemic like the coronavirus only makes this abundantly and agonizingly clear. There is no government response because there is no government. There is only a pseudo-Trump Administration that was never intended to govern or fix problems. Donald Trump was elected to be the death blow to American governance.

Even as the tragedy grows by the hour, the Republican Party remains incapable and unconcerned with actually doing anything in this reality.

Confederate Heritage Month's Religious Right's Embrace:  If you haven't watched Netflix's "The Family," you should. It explains a lot about how right-wing Christianity run deep, explains Scott Walker's bible quotes, and makes the following Jared Yates Sexton string of tweets more relevant. This is real:


Seriously. Read this. A Confederate Heritage Month during a generational pandemic. If you don’t see this as trying to appease a racist god I don’t even know what to say anymore. https://t.co/TJdsLRXz3w
— Jared Yates Sexton (@JYSexton) April 6, 2020