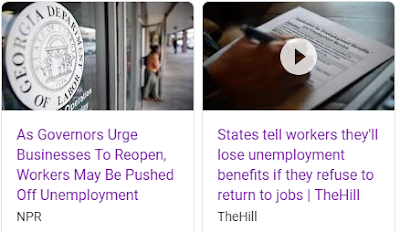 This is what happens when fringe elements of society dictate dumb policy. Sure, protest, but the number of "go-to-work-and-die" losers is small. When millions protested Act 10 and later students were protesting for sane gun regulations in Wisconsin, no one listened, but when a thousand COVID-19 deniers turned up unprotected with no social distancing, it's back-to-work with tons of media coverage? 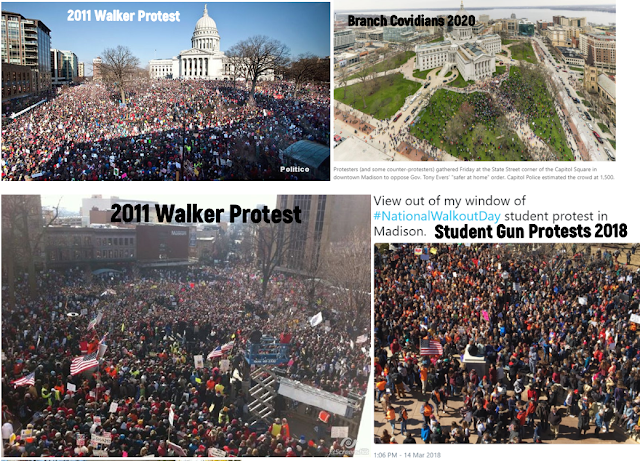 Science denying crybabies embraced their capitalistic, employee-minded servitude, by whining and claiming that now useless old people and school children are worth the sacrifice. 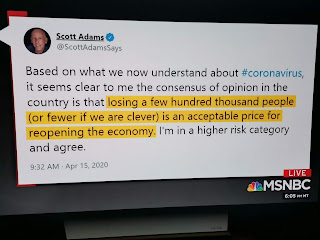 Heck, even before the protests, state corporate lobbyist Wisconsin Manufacturers and Commerce came out with their Back-to-Business marching orders. Notice Gov. Evers success at keeping the pandemic rates low is now being used as a weapon by business. From UpFront:


Bauer: "You're looking at Wisconsin infection rate, Wisconsin's hospitalization rate, and the death rates are relatively small by comparison..."


“If you have substantial risk, a restaurant in Milwaukee, they would be able to open up to 50 percent."

Forced Labor for pennies, No Lawsuits, No Liabilities: It's an avalanche of opportunity for the taking. First we saw this...

The administration is aiming to shield corporations from legal responsibility for workers who contract the novel coronavirus on the job, a move that the Chamber of Commerce and right-wing advocacy groups are aggressively lobbying for

Republican governors Punish Constituents: You've got to be some-kind-of-cruel to boldly think this is works during a pandemic: 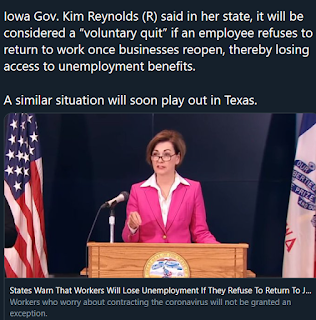 In Iowa, Governor Kim Reynolds (R) said failing to return to work would be considered a “voluntary quit,” which would terminate an employee’s benefits. "If you're an employer and you offer to bring your employee back to work and they decide not to, that's a voluntary quit," Reynolds said Friday. "Therefore, they would not be eligible for the unemployment money." The governor also said employers should file a report with Iowa Workforce Development if they encounter workers who refuse to come back to their jobs.

A similar situation is playing out in Texas, where Republican Governor Greg Abbott announced that businesses can reopen on Friday. Cisco Gamez, a Texas Workforce Commission spokesman, told the Texas Tribune that employees who choose not to return to work will become ineligible for unemployment benefits.

And how safe will workers end up being?