Walker has no plan for Clean Energy Jobs and Energy Production, saving Wisconsinites on their energy bills.

The latest Marquette Poll saw an oversample of Republican respondents, which depressed many Democratic voters hoping for a "blue wave." Imagine 4 more years of Scott Walker, a guy who's manage to sell his voters on having Wisconsinites fund transportation costs instead of all those out-of-state drivers. That's amazing.

Conservative politics and gerrymandering have managed to force Wisconsinites to accept the inevitable higher cost of their agenda.

Walker's Fossil Fuel Knuckledraggers: We don't produce our own oil, coal, or gas. We're dependent on fossil fuels from other states that make a profit off us, the ratepayers.

Four more years of Walker will see us falling even further behind other states that have embraced clean energy and a future rich in cheaper solar and wind energy. You won't see Walker's Wisconsin anytime soon in this top ten list of states: 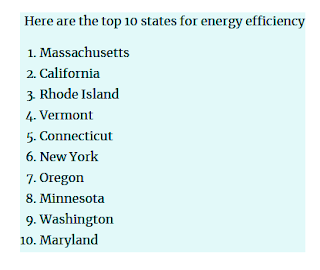 These efforts contributed to the 2.25 million-plus efficiency jobs last year in the United States."

Hell, we're not even mentioned in the article, that's how bad we are at present, with not a whisper of adopting any of the following in any serious way:

States spent just under $8 billion on energy efficiency in the utility sector last year, up from $7.6 billion in 2016, and saved nearly 27.3 million megawatt-hours. That's a 7.3 percent increase in electricity savings and could power about 2.5 million homes for a year.

And Republican voters would be happy paying so much more for less reliable, 20th century based energy, while other states plan ahead? Remember, instead of a gas tax, Walker raised registration fees on electric/hybrid cars...:

The report highlighted that Massachusetts launched a plan to set new three-year energy savings targets and approved $220 million to modernize its electric grid. The goal is to improve efficiency and reliability and pave the way for the deployment of smart meters.

California and eight other states rolled out updated plans that encourage people to buy zero-emission vehicles, while Missouri moved to incentivize the rollout of more electric vehicle charging stations. Furthermore, more states are pushing for zero-energy construction, referring to buildings that produce as much power as they use.