Well, well, well, it appears some Republicans like Scott Walker are still dragging out the Dragnet 67 Joe Friday speeches about the danger of marijuana, the "gateway drug."

Yawn, it all seems a bit insane doesn't it, especially after an entire nation like Canada just legalized recreational marijuana. Besides, the 80-year-old ban in the states has been a disaster.

But I remembered vividly one particular Dragnet 67 episode, the Big High, where two marijuana users made the case for legalization...even predicted how their generation would finally change the law. Watch in wonder how every reason used to pass recreational pot today completely destroyed Joe Friday arguments. And yet, Scott Walker said the same things tonight during the gubernatorial debate (there's a short clip of that is at the end). Oh, and Tony Evers said he would seriously consider making it legal:

Here are the latest stats from Business Insider: 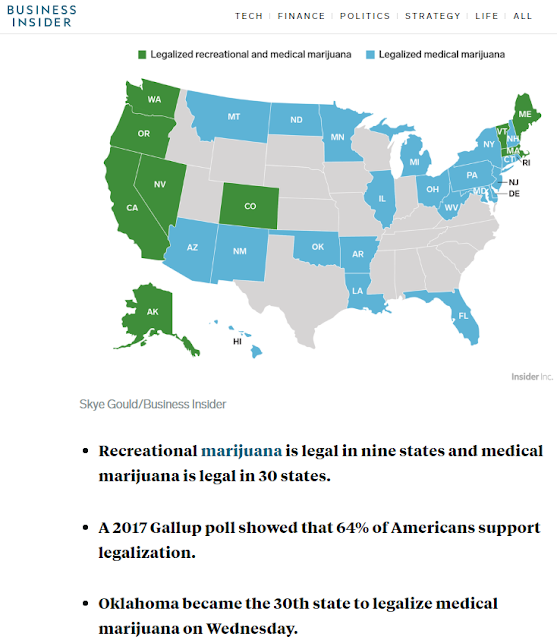 Remember, just like agricultural hemp, Walker Republicans were just too uptight to move forward, missing out on another whopping big money industry. Maybe they'll change their minds in the next desperate election:


Legal marijuana sales exploded to $9.7 billion in North America in 2017, according to a report from Arcview Market Research and BDS Analytics. That represents a 33% increase over 2016, shattering previous expectations about how quickly the marijuana industry could grow in the face of federal prohibition.

Support for marijuana legalization reached new highs in 2017. A Gallup poll showed that 64% of Americans favor legalization, and a majority of Republicans back it for the first time.