In a nicely written piece for the Cap Times, Sen. Kathleen Vinehout details the importance of the Legislative Audit Bureau, and how it's the only way we can determine if the government is doing a good job or not and whether the laws passed were working. Kind of important right?

Vinehout also took the opportunity to remind voters what happened around June 9th, 2015: 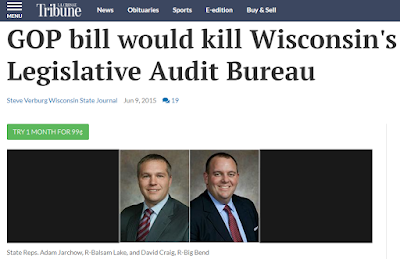 These two dangerous GOP knuckleheads, Rep.'s Jarcho and Craig, wanted to take away the only measuring stick available to hold the Walker administration and majority Republican legislators accountable to voters. In a twisted "cart before the horse" kind of logic, Jarcho and Craig argued the LAB didn't somehow prevent problems their backward GOP legislation created. They thought, what good is the report if it's after the fact? You can't make this stuff up:


They said the bureau does a “tremendous” job, but it fails to prevent problems. Jarchow and Craig said in the email:


“Unfortunately, the statutory process under which the LAB operates focuses more on retrospective examination rather than proactive fiscal action and bad practice (deterrence). In many instances, by the time an audit has occurred the political will (or new legislative composition) necessary to change a state program has diminished.”

Jarcho and Craig wanted to replace the LAB with partisan inspectors general...for the heck of it?

Under the bill, the audit bureau would be replaced by a system of inspectors general working within state agencies. Rep. David Craig wasn’t available to discuss his assertion that the inspectors would be better at getting ahead of problems.

Maybe there was an even more devious plan? Yup, and since both Legislators are anti-environment, is it any surprise this additional provision was included:

The proposal includes a provision that would require anyone challenging a state agency decision to seek review by an inspector general before using another avenue, such as a contested case hearing in which an administrative judge rules. Environmental groups use the hearings to contest state Department of Natural Resources pollution permits they believe provide inadequate protections to air and water quality.

As Vinehout detailed, this is what we would have been missing. The point is, the LAB shows us ways to improve legislation:


The Legislative Audit Bureau helps answer questions about the effectiveness and efficiencies of state government. Recently, the work of the nonpartisan LAB was given the highest possible rating by the National State Auditors Association. The auditors’ work provides answers to questions such as: Did the program meet its goals? Did the program follow state law? How was the money spent?

Without the LAB’s work, our state would not be able to conduct business with the federal government due to requirements for a review. Nearly 30 percent of Wisconsin’s $76 billion budget is federal money. Without the work of the Audit Bureau our state could not borrow money or issue bonds. Our state has about $14 billion in bonds (debt).

The LAB staffers are the sentinels of state government. They point the way to problems, offer recommendations to solve those problems, and give the “all clear” that everything is working well.