1. I'm a 24-year retired veteran of the United States Military.

2. I worked as a union locomotive electrician and train dispatcher for the BNSF Railroad ... worked as a Deputy Sheriff of Corrections at the St. Louis County Jail.

4. In Polk County to help organize our local Democratic Party. I love my country and I am concerned for its future. The people of Northern and Western Wisconsin need to know that someone is standing up for them in Washington. That is work that I am eager to do.

WSAW: "It's been tiring, I've had a lot of windshield time." She said running a campaign in a district that covers 26 counties is a full time job ... she is living off her savings trying to win the votes of people in the seventh congressional district. "I'm not rich, I don't have big super donors giving to my campaign, you will not see television ads like other campaigns this season. The latest numbers show she has raised nearly $88,000 compared to Duffy's $3.3 million.

Engebretson said her experience in the military, along with working as a union locomotive electrician and opening her own law practice has provided her a well-rounded experience that is representative of the district.

1. "We over the decades have put a patchwork quilt-type health care system. So, we have thousands of different health care plans. We have employers that offer different plans, deductibles, all of this stuff. So, it's this really complex, confusing, multilayered health care system that we, unfortunately, built ourselves," Engebretson said. "And at what point do we just finally look around and say we can do better?" She said the switch would not happen overnight because of the complexity that health care is today. She explained one of the big benefits to Medicare for all is that costs would be lowered because those costs would be standardized.

2. Engebretson said there has not been enough investment in rural districts and small towns, which has caused people and businesses to leave to more developed areas. She explained if roads could be improved, people would have easier access to these areas and to the larger economy. If there was reliable and fast cell service coverage and broadband, businesses could grow, knowing they would have reliable access to customers in a world that is increasingly going digital.

3. "Wages are stagnant. Main streets have died," she urged. "I live in a town where my main street has struggled and you go around Wisconsin and it's just heartbreaking. And people are having to work more than one job, they don't have health care, they're losing hope."

4. She has claimed Duffy is an absentee representative, caring more about making cable television interviews than working with his district on issues important to him. Duffy responded by saying that claim is foolish. "People know I go to parades, and fairs, and dairy breakfasts all over this district. I do telephone town halls..." She said people in the district tell her the town halls he holds are scheduled last minute and people often do not get responses from him or his office when they reach out. She added he does not fight for the resources the people of the district need.

1. Nationally recognized professional lumberjack athlete - two-time world champion in the 90-foot speed climb, a three-time champion in the 60-foot and an accomplished log-roller.

2. Sean has been a color commentator for ESPN's Great Outdoor Games, as well as a Badger State Games Honorary Athlete. 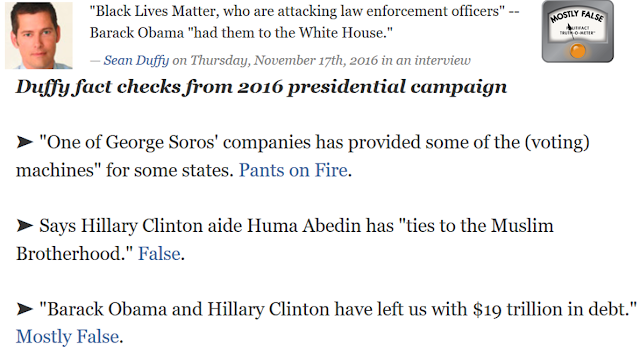