Kavanaugh is the Total Destruction of the U.S. Supreme Court...now that's trying out something different, right voters?

One thing we finally did confirm during Brett Kavanaugh judiciary hearing rant was that Republican nominees really are just partisan and prejudicial activists pushing a legislative agenda from the nations highest court, something we knew but was hidden under the guise of strict constructionism (which by itself is conservative mumbo-jumbo). Here's the video clip to document the end of the nations highest court:

Kavanaugh: "This whole two-week effort has been a calculated and orchestrated political hit, fueled with apparent pent-up anger about President Trump and the 2016 election. Fear that has been unfairly stoked about my judicial record. Revenge on behalf of the Clintons, and millions of dollars in money from outside left-wing opposition groups."

Only now is the press gathering up the courage to call into question Kavanaugh's temperament and partisan rant promising "what goes around comes around."

Possible Impeachment? If not just for the politicization of the Supreme Court by activists like Kavanaugh, Democrats will most likely go after Kavanaugh for lying to Senators during his confirmation hearings:


The House would investigate Supreme Court nominee Brett Kavanaugh if he's confirmed to the court and the Democrats take back the majority. “We would have to investigate any credible allegations certainly of perjury and other things that haven’t properly been looked into before," Rep. Jarrold Nadler said on ABC's "This Week." "We cannot have a justice on the Supreme Court for the next several decades … who has been credibly accused of sexual assaults."

And there's a lot of misdirects, lies and non-answers to cover, as shown here by this Vox chart on the right. He's no unbiased player either:


Democrats for three years had been blocking President George W. Bush’s 2003 nomination of Kavanaugh to the U.S. Court of Appeals for the D.C. Circuit. They argued he was biased, as shown by his work as a lawyer for Bush’s presidential campaign, for an independent counsel’s investigation into President Bill Clinton and for other conservative causes.

And some of them raised red flags about “his professional experience and the question of his freedom from bias and open-mindedness.” “One interviewee remained concerned about the nominee’s ability to be balanced and fair should he assume a federal judgeship,” the ABA committee chairman wrote to senators in 2006. “Another interviewee echoed essentially the same thoughts: ‘(He is) immovable and very stubborn and frustrating to deal with on some issues.’” A particular judge had told the ABA that Kavanaugh had been “sanctimonious” during an oral argument.

Here's a twitter history documenting the total destruction of the Judicial Branch of government once and for all. Let's hope the Democrats find the courage to impeach Kavanaugh: 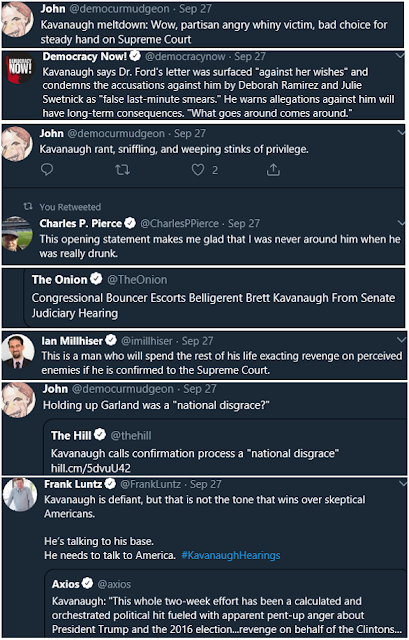 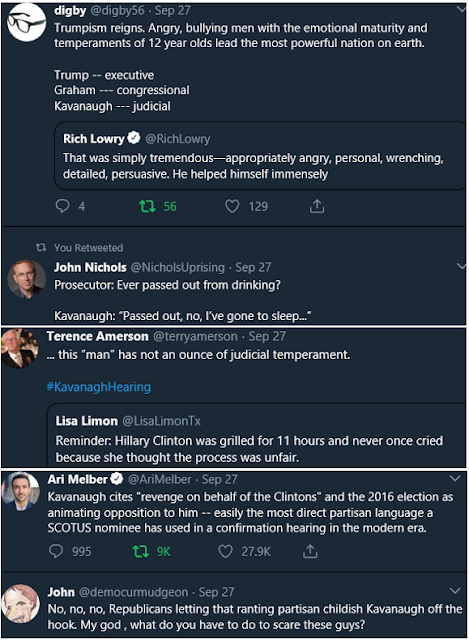 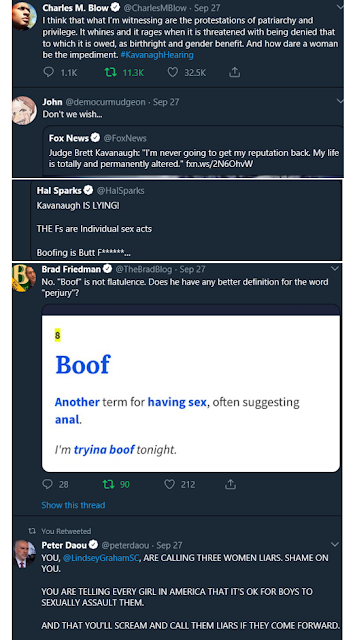 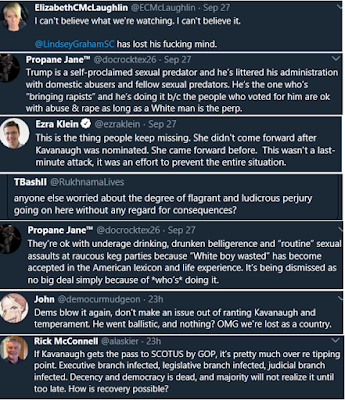 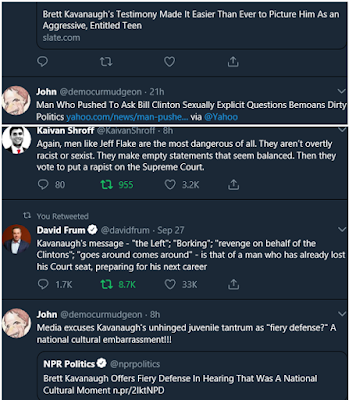