Who the hell is making all these former cabinet secretaries so disgruntled? Scott Walker, that's who.

AP: A fourth former Cabinet secretary Paul Jadin in Gov. Scott Walker's administration is speaking out against the Republican incumbent.

Keep in mind Scott Walker was forced out and fired as chair of the Wisconsin Economic Development Committee.


Paul Jadin is a former mayor of Green Bay and was the first secretary of Walker's economic development agency, WEDC.

This was amazing as well:

Jadin says he quit his $208,000-a-year job at the Madison Regional Economic Partnership on Wednesday so he could comment freely.


"We were proud to lead the way ... that pride evaporated at various times for each of us as we found ourselves disagreeing with both policy and practices within the administration that lacked integrity. It became clear that his focus was not on meeting his obligations to the public but to advancing his own political career at a tremendous cost to taxpayers and families.

Walker's campaign issued a statement praising work of the economic development agency since Jadin left, but did not address his criticisms of the governor.

Let's end this on another not so surprising conclusion... 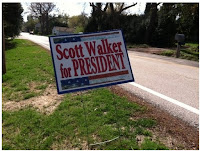 "During the recall in 2012, he stopped attending cabinet meetings and delegated state business to his chief of staff and DOA Secretary. When he decided to run for president in 2015 he subordinated Wisconsin interests to those in Iowa and New Hampshire and his policy/budget proposals started to clash with members of his own party who still would have to stand for election in Wisconsin."

Walker's former transportation secretary Mark Gottlieb also said earlier this year that the GOP governor isn't telling the truth about road projects and is taking a high-risk gamble that could see the state invest billions of dollars in obsolete highways.