Paul Ryan says successful Universal Health Care Systems in every other country in the World won't work in U.S.?

Paul Ryan decided to leave office by repeating outright lies and fabrications about universal healthcare. This guy is playing Americans for fools and Trumpian dumb asses. He even uses the word "socialism." Ouch.

His latest tweet and video are embarrassing, especially since every industrialized country has the kind of insurance he says just won't work... Ryan: "...it is the hollow empty promise of socialism..."

Ryan says it ends "having choices." Uh, no, Medicare for all would give everyone the choice of any doctor and any hospital. And since we don't have a universal system, why would we create one that lets the government get between ourselves and our healthcare as Ryan claims?

What universal health care does is that it simplifies everything and eliminates the complicated maze we have now, that encourages overcharges, fraud, and bureaucratic red tape.

Paul Ryan has been saying this stuff for years, and for years, the media has been letting him get away with it. So it's no surprise that he keeps repeating this utter nonsense:

Truth-Yes: First, where is this clueless person who loves paying expensive premiums every month, has high deductibles and can't wait for the next major yearly increase that might force them out of coverage?  Yes, obliterate private insurance slowly or...some single-payer systems rely on private insurers to manage their national health care plans or offer elective coverage etc.

Truth: Yes: Hello, that's what single-payer/universal healthcare does. Plus, employers no longer have the administrative burdened. Plus, it puts us on equal footing with every other industrialized country.


Ryan→ Single-payer, government-run health care would essentially destroy and obliterate →Medicare as we know it.

Truth: Yes: Again, that's what single-payer/universal healthcare does. All the money already in Medicare will be used to help pay for universal insurance.

In what should be a cakewalk for Randy Bryce to replace Paul Ryan (except for the fact Republicans blindly vote party and not their own self-interest), challenger and scary Ryan clone Bryan Steil failed to mention our current health care system costs $2 trillion more than Medicare for all: 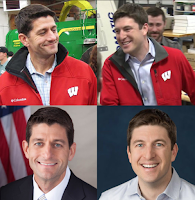