Bear with me, this is a setup for the latest lunacy from Sen. Leah Vukmir, comparing Kavanaugh protesters to Act 10 protesters.

Let's start with the supposed grassroots tea partiers who showed at townhalls protesting TARP and ACA:


The Tea Party protests were a series of well-funded protests throughout the United States that began in early 2009. The main investors included big tobacco, big oil and the Koch brothers. 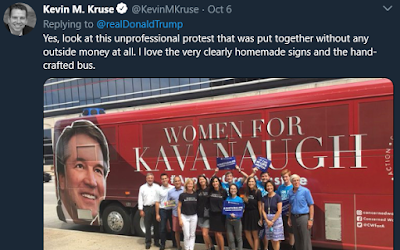 Vukmir Supports Sexual Assaulters: Which brings us to Leah Vukmir's latest shredding of the First Amendment, eliminating making "no law ... abridging the freedom of speech ... or the right of the people peaceably to assemble, and to petition the Government for a redress of grievances." She'll help Trump get his wish...

The wise and wonderful Trump knows all this, without proof, casting aside any assumption of innocence.


Trump: "You can't go around and whether it's making up stories or making false statements about such an important position, you can't do that. You can destroy somebody's life."

Vukmir is right there Trump and Gov. Scott Walker. To them protesting is really - intimidation - not a chance to "peaceably assemble and petition the government for redress of grievances." Walker's book "Unintimidated," makes that quite clear. 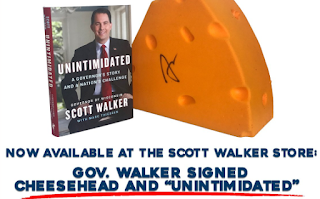 In an opinion piece on Fox News, Vukmir marches in Borg-like lockstep with Walker's thinking, a far cry from what the founding fathers intended. Over a million people protested in Madison and throughout the state, and all were "paid?" Maybe a check to my whole family got lost in the mail:

Senators walked out on hearings to create a media spectacle. Countless delaying tactics were employed to obstruct. Virtue signaling, smears and hyperbole caused widespread chaos. Paid protesters were instructed to corner and confront the so-called “enemy.”

You may think I’m talking about the latest in the saga of Supreme Court nominee Judge Brett Kavanaugh and how extremist Democrats are doing everything in their power to block his confirmation. You are correct. But what we’re seeing today with the Kavanaugh nomination are the same intimidation schemes those on the left implements whenever their ideas don’t win at the ballot box ... they’re making this confirmation process their all-or-nothing championship game. We saw the full force of what liberals are willing to do when our state Capitol was under siege in 2011 during the debate over collective


Our Capitol building endured incredible amounts of damage that required significant restoration and repair (nope, mostly yard work repairing the lawn) ... Town hall meetings were hijacked by people who thought being belligerent was more important than participating in reasonable dialogue (you know, saying something they don't like and won't change).

Vukmir is now changing an altercation between two Supreme Court Justices that can easily be disproved with a simple Google search. This is an incredible and unnecessarily stupid lie, in a grotesque attempt to call into question a female Justice's choking claim to protect a physically abusive male Justice:

Vukmir: "The state courts weren’t immune to these ridiculous and slanderous attacks. In 2011, during an election that was largely seen as a referendum on our reforms, extremely liberal state Supreme Court Justice Ann Walsh Bradley accused Justice David Prosser of choking her. In the end, this was just another smear. No charges were filed, but sadly his legacy has been blemished."

Said in true authoritarian fashion, from a party whose votes represents just under a quarter of the population, there are no other legitimate parties:


I won’t buckle, and I will force other weak-kneed elected officials to buck up, do the right thing, and ignore the absurd shenanigans of the extreme left.