USMCA does little for Dairy Farmers in Wisconsin.

The Wisconsin Farm Bureau Federation would again prefer not doing anything after the US-Mexican-Canadian-Agreement and letting someone else do all the hard work trying to save Wisconsin farms. There isn't one original thought in their heads, and that fits in perfectly with Scott Walker and the Republicans empty agenda.

Things are pretty bad when this is starting to be the go-to solution... 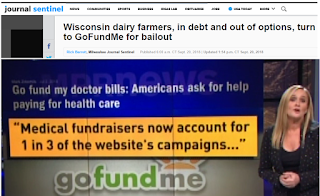 Like in Canada, farmers here need to control the amount of milk being produced, and that isn't going to happen as long as there is consolidation, large corporate farms cranking out product, and putting the smaller guys out of business. What could be more obvious... 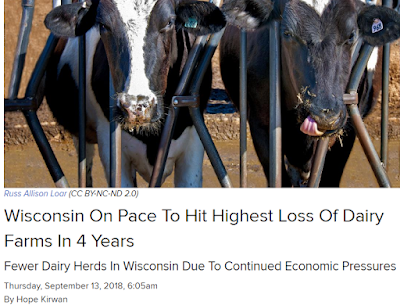 Wisconsin lost 47 dairy farms in August, putting the state on pace for its worst year since 2013. The latest data from the state Department of Agriculture, Trade and Consumer Protection shows there were 8,372 licensed dairy producers at the beginning of September. That’s 429 fewer than were licensed at the start of the year. It’s the biggest decline since 2013, when the state lost 434 farms in the first eight months of the year. Shelly Mayer, executive director of Professional Dairy Producers, said low milk prices for more than three years just became too much for some farms.

Here's where the work comes in, and Republicans like Walker head for the exit when there's a big problem to solve with lots of tough decisions. This is a time "America's Dairyland" needs to lead:


Kara O’Connor, government relations director for the Wisconsin Farmers Union, said the small wins in Canada won’t fix the underlying problem in the American dairy industry. "The best estimate that we have now is that the additional sales that the U.S. will be able to send into Canada will equal less than 2 percent of total U.S. sales by value of dairy products," O’Connor said. O’Connor said the U.S. needs an incentive for individual farmers not to overproduce, much like Canada’s quota system.

Higher Prices...no problem: While all "free trade" agreements should have included increased wages that lifted all boats, the new trade deal follows through a little on that idea and even promotes unionization...which will definitely increase prices...something Democrats were criticized for but because Trump is doing it, it's okay?

Dairy Immigrant Labor Supported by Trumpsters who Hate Immigrants?: Here's an example from Esquire and audio below from NPR:


Sibley Iowa/Osceola County, voted 79 percent to 17 percent for Trump over Clinton … 40,000 undocumented immigrants, mostly Hispanics are essential to Iowa … coffee shop Brenda Hoyer mentioned Trump’s immigration policy ... she was quick to add, “Well, we don’t agree with him on that” … the mayor replied with what was already becoming a familiar refrain: “I don’t agree with him on that!”

Midwestern dairies tend to run on undocumented labor. The low unemployment rate, low profit margins, and the global glut of milk keep prices low. If dairies had to use legal labor many dairies wouldn’t survive. “People are going to go broke,” the farmer said.

What this person was describing was hard to wrap my head around. In the heart of Steve King’s district, the economy is powered by workers that King and Trump have threatened to arrest and deport. The absurdity of this situation—funding and voting for politicians whose core promise is to implement immigration policies that would destroy their livelihoods … the first area dairy farmer I had spoken to said, “I’ve talked to Steve King face-to-face, and that guy doesn’t care one iota about us. He does not care. He believes that if you have one undocumented worker on your place, you should probably go to prison and we need to get as many undocumented people out of here as possible.” The second dairy farmer added, “They want to send ’em all back to Mexico and have them start over. What a crock of malarkey. Who’s gonna milk the cows?”

The Washington debate is completely detached from what is actually going on in places like Sibley. There is massive political hypocrisy at the center of this: Trump’s and King’s rural-farm supporters embrace anti-immigrant politicians while employing undocumented immigrants. The greatest threat to Iowa dairy farmers, of course, is not the press. It’s Donald Trump.


Host: On the story which concludes the book, about a woman in Oklahoma who prayed for a tornado to destroy her barn

Michael Lewis: First let's explain why Miss Finley wanted her barn gone: Her husband had killed himself in the barn, and she imagined this act of destruction would come and kind of ease her pain — she wouldn't have to stare at the barn any longer. And what she doesn't imagine is that the same tornado that's going to come take her barn is going to destroy her house, and she didn't want that.

It doesn't imagine all the collateral damage — it doesn't imagine the damage it will actually do. And I think this failure of the imagination is somewhere near the center of what we're going through right now.