It's stunning really. Republicans are so against "health care for all" that they haven't even bothered to educate themselves about one of the most important economic issues of our times. This is life or death stuff.

One of the least educated people to sit on the House Financial Services and Joint Economic committees is Rep. Sean Duffy, and it shows. Despite plunging the nation further into debt with a tax cut to the rich, "In regard to the debt, I'm gravely concerned," Duffy revealed how little he cares about peoples health care.

The fact that angry "resentful" Republican voters are okay with paying for a politicians government-run health care while being told they aren't worth it is still a mystery to me.


Rep. Sean Duffy said he believes a free market system, with regulations handled by the state rather than the federal government, is better than what he calls one-size fits all model paid for by the government.


"In Wisconsin, we had a system... we were able to get those with preexisting conditions into a higher-risk pool, they paid a little bit more, totally affordable, and they were absolutely able to get health insurance. But also if I take them out of the healthy people's pool, I'm able to keep their rates lower, but also guarantee those with a preexisting condition insurance."

GOP Gift to Insurers is OK?: When did Americans agree to protect insurance company profits by putting sick people in a separate taxpayer/premium supported pools? Insurance is based on spreading risk and keeping rates low with large insurance pools, just like ObamaCare did but was bashed by Republicans because rates were a little higher, but nowhere near the cost of high-risk pool rates for preexisting conditions.

The Wisconsin Cancer Council has put together the best summary explaining our supposedly nationally admired high risk pools, HIRSP, or "health insurance risk-sharing pools." So did these pools lower regular insurance premiums? actually, no one knows. Also, think of these pools as a maze you're told to navigate if you want coverage bad enough. Don't forget, Duffy says it's "totally affordable:"

2. All HIRSP plans had high deductibles – 80% of enrollees were enrolled in plans with either a $2,500 or $5,000 deductible. There is no clear evidence showing the magnitude of the impact HIRSP had on premiums in the broader insurance market.

3. Premiums in HIRSP were an average of 15% higher than new policies sold in the regular market, and varied based on age and sex. Wisconsinites who could not afford the premiums or high out-of-pocket costs were priced out of HIRSP and were left without another coverage option.

5. To reduce costs, HIRSP had a lifetime limit on benefits ($2 million). No HIRSP enrollees reached this limit.

6. Enrollees who were eligible because of a medical condition had a 6-month pre-existing condition exclusion period during which no medical services related to their condition were covered by HIRSP (prescription drug coverage was not excluded).

When you're just talking about cancer patients, excluding everyone else with a preexisting condition...


More than 285,000 cancer patients and survivors currently live in Wisconsin and need reliable access to health insurance that is affordable and comprehensive – free of pre-existing condition exclusions, high out-of-pocket costs, and other elements that increase the financial burden of a cancer diagnosis. Providing this type of coverage would require that a new version of HIRSP be sufficiently funded in order to remain affordable and sustainable.

Check out the rates (don't forget high deductibles not listed here) way back in 2013, imagine what they might be today, and then tell me how "they're a little bit more, totally affordable." 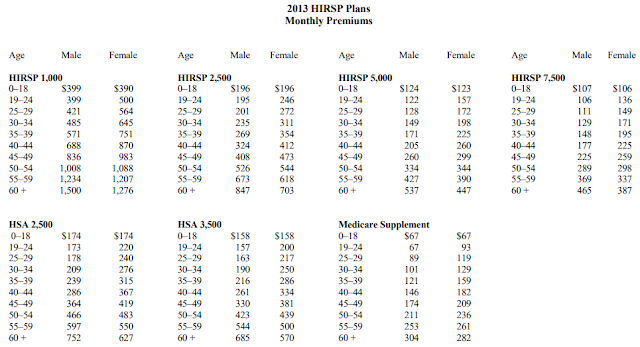