Trump's War on Liberals is Real yet played down by News Media!

My son the college freshman gave me a little lesson yesterday over Trump's latest attacks. It's simple:

Republicans are always reminding us that we're not a democracy, but a republic. That "will of the people" thing is not the desired outcome. Think voter suppression.

As you watch this Trump video, it all becomes perfectly clear:

Pres. @realDonaldTrump: "You don't hand matches to an arsonist and you don't give power to an angry left-wing mob - and that's what they've become. The Democrats have become too extreme and too dangerous to govern. Republicans believe in the rule of law, not the rule of the mob." pic.twitter.com/E9r4Xrnrrw
— The Hill (@thehill) October 7, 2018

This explains why Scott Walker and State Sen. Leak Vukmir thought Act 10 protesters were trying to intimidate them. They saw them as a mob.

“In their quest for power, the radical Democrats have turned into an angry mob. Each of you will have a chance in just four weeks to render your verdict, on the Democrats’ conduct, at the ballot box. If you allow the wrong people to get into office, things could change. They could change and they could change fast. You don’t hand matches to an arsonist and you don’t give power to an angry left-wing mob ― and that’s what they’ve become. The Democrats have become too extreme and too dangerous to govern. Since right from the moment we announced [Kavanaugh’s nomination], radical Democrats launched a disgraceful campaign to resist, obstruct, delay, demolish and destroy.”

Check out this lengthy tweet thread from David Neiwert to get the whole picture of the Trump nightmare war against liberal=Democrats=mob:

3) This is a remarkable moment in American politics: The President of the United States just declared an entire political party fundamentally illegitimate. And the media are treating it as just another of Trump’s crazy things.
— David Neiwert (@DavidNeiwert) October 7, 2018

4) I’m almost surprised that, after the remark about the rule of the mob, Trump didn’t then lead the crowd in a chant of “Lock her up!” That’s how brazen they have become.
5) But this is the state we are at now. One side of the political aisle, and only one, appears intent on provoking a violent civil war in America. And it is the party currently in power.
6) Sure, they like to claim that the Left is planning to provoke a civil war. You can find all kinds of people saying that, including Tucker Carlson.

7) But no one on the left actually talks about it or, for that matter, really even thinks about it much. There are no left-wing pundits talking about civil war. But you can find dozens of right-wing pundits doing so. Are rightwing pundits right that America is on the brink of a civil war?

8) They pay lip service to denying that they hope for it, but their constant obsessing and chatter about it tells us otherwise. Especially when they fantasize about the better world that would emerge afterward.
9) Of course, the most prolific promoter of the “civil war” idea is Alex Jones and his Infowars operation.
10) But it has spread everywhere on the right, including to Fox News (see Carlson above) and to Rush Limbaugh.

11) Mind you, this is nothing new for Limbaugh. He made nearly an identical claim back in 1995 after the Oklahoma City bombing occurred.

12) Indeed, as I explain in some detail in _Alt-America_, the militia/Patriot movement is where the whole “modern civil war” idea originated, and it has remained largely alive in the same sector in the intervening years.

13) It gained real life in the Tea Party movement, which hosted organizations like the Oath Keepers that openly discussed preparations for a civil war. This is also where we saw it become common for people to talk among themselves about killing liberals.

14) Let’s also not forget radio host Michael Savage, an early and prominent Trump supporter. He published an entire book dedicated to essentially fomenting a civil war (under the guise of preventing one).

15) In the runup to the 2016 election, this kind of talk intensified. Militias especially were planning a violent resistance to a Clinton administration.

16) Recall especially the Kansas militia gang that planned a McVeigh-style truck bombing of a community of Somali Muslims in Garden City. Their plans called for the attack to take place the day after the election.

17) This kind of talk became common among not just militia types, but spread to rank-and-file Trump supporters as well.

18) After Trump won, it only took a week or two for them all to shift gears and begin preparing to act violently in Trump’s defense. They ginned up the whole "violent radical left" storyline in the runup to Trump's inauguration. ion

19) Now when you hear talk about a civil war, it is most common in the context of preventing his impeachment.

20) And now we have gangs of heavily armed right-wing thugs, largely outsiders from rural and exurban areas, invading liberal urban centers with the full intent of provoking violence so that they can portray the American left as innately violent.

21) I’ve covered about a dozen of these events. I hang out among the alt-righters and militiamen who populate that side and listen to them. They all are brimming with eagerness to beat the shit out of liberals, and they’re prepared to kill if they deem it necessary.

22) The Proud Boys are a classic proto-Brownshirt operation in the formative stages. Look at the shirts their members have been wearing to the “free speech” events they organize with the intent of provoking a violent response.

23) What does that mean? Well, Chilean dictator Augusto Pinochet murdered thousands of his own citizens in the 1970s simply for opposing him politically. He had right-wing death squads do most of the dirty work.

24) A number of these murders occurred when the death squads would drop political dissidents from great heights out of helicopters. Thus the back of the T-shirt. Which is now sold as official Proud Boys gear.

25) Moreover, all these shirts are being printed with a logo calling them “Right Wing Death Squads.” There’s even a webpage devoted to their apparel. Google it. Here's their logo. 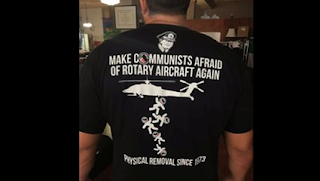 26) So now the faction that has long fantasized about civil wars is openly fantasizing about murdering their fellow Americans by various means, most of them as cruel as a good psychopath can dream up. These folks are fanatical authoritarians.

27) And they are entirely right-wing. There is no counterpart to this on the left. Even the most rabid anarchist/communist/whatever group doesn’t direct this kind of rhetoric at its opponents. Moreover, the far left is a tiny and powerless faction. Unlike the alt-right.

28) Moreover, it is the far right that now controls all three houses of government in the United States. And the most powerful of all, the president, has a long habit of using eliminationist rhetoric to attack his opponents: “Lock Her Up!” was just one of many such.

29) Now he is describing half of America – the larger half that did not vote for him, and which now opposes his agenda at every turn – in such terms. Dismissing them as a “mob” and suggesting that they not only cannot govern but cannot BE governed is lethally dangerous.

30) Yet to hear the centrist media figures and their favorite subjects, centrist politicians, discuss all this ferment, you would think that both sides are engaging in this kind of prewar rhetoric. It’s absurd.

31) So, listen up, Chuck Todd, Evan McMullin, Susan Collins, and every other hand-wringing centrist wannabe: IT’S NOT BOTH SIDES. Only one side is trying to gin up a civil war in this country.

Labels: Trump War on Liberals
Email ThisBlogThis!Share to TwitterShare to FacebookShare to Pinterest