Victim Gov Palin Threatens Frivolous Lawsuits, Tearing Down Another “Republican Issue.” What do they stand for anymore? 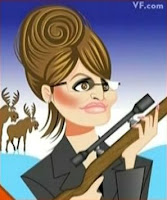 I think it's sad that this isn't the last we'll hear of Sarah Palin. Someone so vindictive will hang around forever, or at least until every critic is in jail, or discredited in the conservative community.

"AP/Huffington Post - Outgoing Alaska Gov. Sarah Palin cast herself as a victim and blasted the media, calling the response to her announcement "predictable" and out of touch.
"How sad that Washington and the media will never understand; it's about country," the statement said. "And though it's honorable for countless others to leave their positions for a higher calling and without finishing a term, of course we know by now, for some reason a different standard applies for the decisions I make."

Palin doesn’t want people to think she’s a quiter, even though she is, or that she can’t take the heat, which she can’t. But if that weren’t enough, Palin’s status as a public figure opens her up to legally protected criticism, what private citizens would call defamation. My gut feel is that she wants to get even with someone, anyone liberal, for the cost of defending herself against alleged unethical and legal behavior. This could be entertaining:

"Palin attorney Thomas Van Flein on Saturday warned legal action may be taken against bloggers and publications that reprint what he calls fraudulent claims.

"To the extent several websites, most notably liberal Alaska blogger Shannyn Moore, are now claiming as 'fact' that Governor Palin resigned because she is 'under federal investigation' for embezzlement or other criminal wrongdoing, we will be exploring legal options this week to address such defamation," Van Flein said in a statement. "This is to provide notice to Ms. Moore, and those who re-publish the defamation, such as Huffington Post, MSNBC, the New York Times and The Washington Post, that the Palins will not allow them to propagate defamatory material without answering to this in a court of law."

Would such a God fearing American like Palin scratch out the First Amendment to the Constitution for the simple act of revenge? You betcha. Using her kids one more time for attention, outrage and public sympathy, this self important Republican carnival barker revealed all we needed to know.

"Palin gave many reasons for stepping down; she was tired of the tasteless jokes aimed at her five children, including her son Trig, who has Down syndrome…"

Right, liberals and Democrats typically make fun of the less fortunate in society and advocate abandoning them, claiming that they’re a drag on society and a waste of taxpayer dollars. I’ve never been aware of a “tasteless joke” aimed at Trig. Can you say projection? Finally, Palin is symbolized by the last clown in the 4th of July parade.

"The governor spent the Fourth of July weekend in the state capital, Juneau, but was only spotted briefly on the sidelines of the city's parade. She had been invited to ride in a convertible, as she did last year, but never told organizers whether she would attend.

Juneau parade director Jean Sztuk said officials drew up banners in case Palin showed and was willing to take part. As the last of the parade's clowns and marching bands headed past her, Sztuk gave up on Palin."