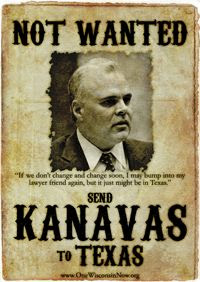 I love creative idea's like the one shown here. A week ago, one of the BIG thinkers at Wisconsin Manufacturing and Commerce suggested we be more like Alabama. Now we have a State Senator, Ted Kanavas, wishing we were more like Texas. Did you ever get the idea these Republican scoundrels would feel right at home in the southern United States? One Wisconsin Now is taking Texas Ted to task;

"If we don't change and change soon, I may bump into my lawyer friend again, but it just might be in Texas." -- Senator Ted Kanavas's threat to move to Texas, 6/30/09

Last week, I pointed out how ridiculous it is for Texas Ted to claim Texas is better than Wisconsin. Texas ranks dead last of all 50 states in health care coverage and children with health insurance, but first in teenage birthrate and the number of state-sponsored executions. The Lone Star State has the lowest high school graduation rate, the dirtiest air and water, the third highest number of convicted public officials and the lowest voter turnout in the nation.

So far, Sen. Ted Kanavas hasn't made good on his threat to take his failed ideas to the Lone Star State. The One Wisconsin Now community has taken notice. Many of you responded to our call to send Texas Ted a message about his desire to leave our great state, and one theme quickly emerged: "Love it or leave it!"-Arno M.