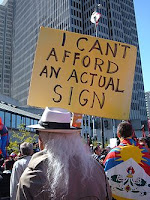 "Irony is wasted on the stupid."
Sure I've offererd up my own analysis of the "rabbit hole" qualities found in the Republican Party, but I thought this perspective offered up by a listener of Air America expands on the more surreal characteristics. I'm not a big fan of comparing the Republcian Party to another countries repressive government, like Iran, but for some reason this hit the right note with me. The irony; the right wingers are calling on the Iranian people to take down their theocratic goverment, a similar kind of government God fearing American's would like to put in place.
The comment below is in response to the story about conservative blogger John LeBoutillier admission to Air America’s Lionel that the GOP is no longer a national party.